The Grid 10 tablet from Fusion Garage is perhaps more impressive for its mere existence than for its performance or specs. It follows up one of the bigger fiascos in recent tech memory in the JooJoo; was launched with an incredibly awkward, tongue-in-cheek campaign from a fake company, TabCo; and is made and sold by a relatively tiny company. On top of that, the Grid 10 tries to carve out a new space in the tablet market by customizing Android past the point of recognition.

We spent some time with the Grid 10 tablet and its cousin, the Grid 4 smartphone today. Can they make you forget about that bad, bad JooJoo tablet? Read on for some hands on impressions, photos, and video! 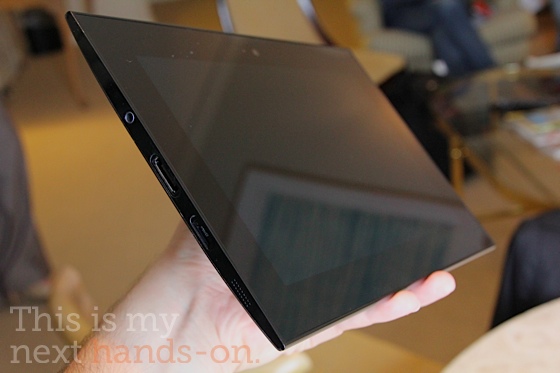 The Grid 10 comes in a 16:9 aspect ratio with a 10.1-inch screen. Fusion Garage is proud of that screen's 1366 x 768 resolution and while it deserves credit for upping the pixel density, in general the panel doesn't rise above your middle-of-the-road Android tablet. The viewing angles on the display are downright terrible and the panel itself feels a little plasticky -- we're told it's some sort of special mix of polycarbonate and glass. Surrounding the display is a large bezel interrupted only by the 1.3-megapixel front-facing camera.

Other than the display, the overall build quality on the Grid 10 is pretty good - the evenly curved back is metal with a single plastic antenna strip and is nicely textured for grip. There's only one button on the device, the power button, but the left and right sides also contain ports for a custom charger, headphones, and slots for a MicroSD card and a SIM card.

The whole thing is more Acer Iconia Tab A500 than iPad 2, but it certainly doesn't feel cheap. 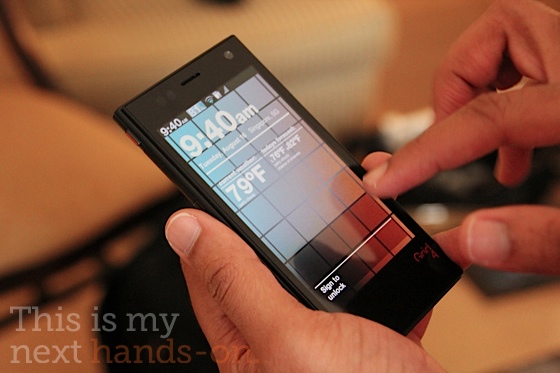 The Grid 4 is a solid, slim, and simple black slab. The case is made of metal with a mild heft and reasonably good build quality. As with the Grid 10, the 480 x 800 TFT LCD screen is nothing to write home about. Video playback was good, quite possibly because of the dual-core 1.2GHz Qualcomm Snapdragon (exact model unknown), but we could scrub very quickly through to any spot -- including the very spot in the movie that synced over automatically from the Grid 10.

The Grid 4 is much further away from completion than the Grid 10. It's due out sometime in Q4 but we're not sure about carrier support. Fusion Garage insists they'll have it and are "in talks," but it's easy to see how a square-peg like Grid OS will have a hard time getting acceptance. 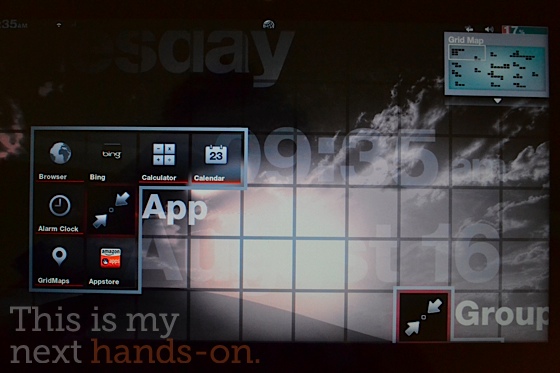 The Grid OS software is dressed to impress. Fusion Garage says that it's built on top of the "Android Kernel" but there's clearly more Android here than that as it can run Android apps downloaded from the Amazon App Market. In any case, it takes quite a lot of digging in order to find the Android at the heart of the OS -- we only managed to dig it up when looking at the unfinished "Frames" productivity suite.

The key conceit of the Grid OS is, well, a big grid. Instead of a separate app list and homescreen, you simply have one large grid that you can pan around. That panning effect is the first sign that there has been a lot of sweat put into making this OS look good -- there's a nice parallax effect between the grid of icons and the wallpaper / clock in the background. You can arrange your apps into clusters and jump from cluster to cluster very quickly. Unfortunately, you can't add widgets to the homescreen.

The Grid OS takes a page from the BlackBerry PlayBook by using bezel-based gestures for core navigation, rather than physical keys. Two fingers down takes you home to the Grid, two from the right is a back gesture, and two from the left brings up the "Heart Beat," which is a combination notification screen, agenda, and app switcher. All of the above gestures worked only intermittently for us, which became increasingly frustrating as we tried to navigate the device.

Fusion Garage has built only the basic apps with their custom Grid OS APIs, including a 3-pane email client, a calendar, a notes app, browser, music and movies, and a few more. All of these apps leave the same impression as the Grid homescreen: there's plenty of pretty animation and swoopy transitions, but perhaps not as much deep functionality as you might like.

Still, Fusion Garage is taking full advantage of the GPU and OpenGL with these "Motion Picture Glass" animations throughout the OS. They make a very strong impression during the first 10 minutes of use -- that's before things seems to slow down and get crashy. We had one reboot and multiple slowdowns during our half hour or so with the device.

The Browser on the Grid 10 is a WebKit affair, of course, but Fusion Garage has decided to remove all the "Chrome" around the webpage by default. When sliding your thumb up from the lower-right, you get all your tabs and features. You can also tap-hold to bring up a fan of other options to perform on the text — from a contextual Bing search to cut-copy to launching a relevant app. Pinch-to-zoom (and scroll) was fast and didn't require any re-rendering time. We were very impressed with the browser's performance ...when it performed. When the tablet as a whole started to slow down (which was often), the browser would similarly lag.

The Grid OS ecosystem gets rounded out with a custom desktop app for syncing media, integration with social media and support for setting up multiple accounts, and finally a "seamless state" feature designed to sync a few things from your device to the "SkyGrid" cloud and back again to other devices. Data which can be synced right now includes the layout of your homescreen Grid, your place in movies (though not, it should be said, the movies themselves), your accounts, and a few other small pieces. Fusion Garage tells us they'll have more information on their cloud service and seamless state soon. Finally, the company has promised to deliver an SDK so developers can code directly to Grid OS using their OpenGL graphics and additional features. 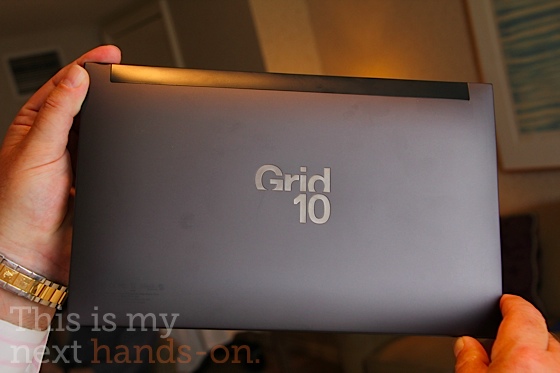 In general we were surprised at how well the Grid 10 from Fusion Garage performed and were impressed with the core idea of the Grid, but that's not to say that it isn't without its (potentially deal-breaking) problems. We'd say that it performs very much like Beta software, intermixing moments of graphical brilliance with half-minutes of stutter and lag. Plus, simply offering to run Android apps doesn't make an ecosystem (just ask RIM). So while we're mildly impressed by some of what we saw in the Grid 10, it's more in a "Great job guys!" way than a "I want to buy this" way.

If you're a current JooJoo owner, the decision is easy because Fusion Garage is sending you one for free. If you're not, you should wait to see if the Grid 10 and Grid 4 can live up to the promise of their flashy graphics and over-the-top viral campaign.