We're in lovely downtown Toronto this evening -- just a stone's throw away from the CN Tower -- for an event kicking off RIM's announcement of the BlackBerry Torch 9810 alongside the full-touch 9850 and 9860. I've just gotten back with an extended session playing with a couple different 9850s, and I'll say this much: these are BlackBerrys through and through. Although BlackBerry 7 is a full major version number beyond last year's BlackBerry 6, it looks exactly the same to the casual observer. And to be fair, RIM points out that many of 7's most important changes are under the hood with so-called "Liquid Graphics" for smooth UI transitions and a thoroughly rewritten browser. Follow the break for hardware and software impressions plus a full gallery!

As the hardware goes, the 9850 doesn't feel as substantial as a unibody metal phone (like some recent HTCs) or the iPhone 4 glass-slab build, but I certainly wouldn't describe it as "cheap" either -- it's a pretty solid balance between weight and excessive plastic. The design generally exudes RIM's typical design aesthetic with curved surfaces balanced between chrome, flat black, and gloss; it doesn't always work perfectly (the original Torch isn't a very pretty phone, for instance) but I think it works here. I do have concerns about the volume buttons along the right edge -- they're surprisingly narrow and difficult to press, and they're broken up by a really tiny mute button. I'm sure users could get used to it, but new owners are going to struggle with these, I think.

I concentrated on the browser in my use of the 9850, since that's where RIM has focused its efforts. In brief, I'm encouraged by the browser performance -- scrolling was consistently as fast and fluid (hence "Liquid Graphics," I suppose) as iOS, which I think still represents the current benchmark. Though they tout HTML 5 video compatibility, I was having trouble getting the HTML 5 YouTube videos on our own site to show -- they'd occasionally show up after waiting a minute or two, but the videos wouldn't actually play either in embedded or full-screen mode. I'm chalking it up to a combination of an overloaded network and early firmware for now, but it's something to keep an eye on. 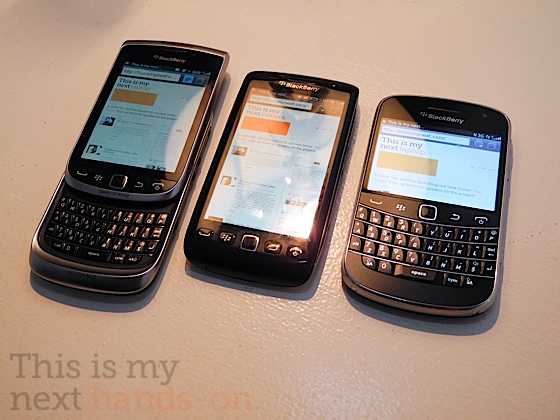 The screen responded easily and effortlessly to touches, but there was a big issue here: I found it to be really inaccurate on both the devices I tried, making hitting links on web pages and using the redesigned on-screen keyboard a laborious (if not impossible) task. On the bright side, the 3.7-inch display is bright and crisp, but RIM's going to need to iron out these accuracy issues pre-launch. Check the full gallery below!