Share All sharing options for: Samsung Galaxy Note for T-Mobile: impressions and benchmarks

T-Mobile's made a charge in the last few months to bring some top-notch smartphones to its shelves, from the Samsung Galaxy S III to the HTC One S — now the company's adding another Samsung handset, the behemoth Galaxy Note. It's available today, starting at $249.99 with a two-year contract. The 5.3-inch smartphone has been around a while, making its debut last fall at IFA, but no competitor has risen in the intervening months and the Note has sold millions of units. The version of the handset coming to T-Mobile is largely unchanged, but is it worth your money and a two-year commitment on T-Mobile?

We reviewed the Galaxy Note months ago, and other than its potentially cumbersome size there's a lot to like about it. The phablet / tabphone / phoneblet is fast and well-made, and its 5.3-inch display is stellar. The included stylus makes the Note a great tool for drawing, getting work done, and, well, notes. Since the device came out, it's also received a huge software upgrade to Android 4.0, bringing a number of new apps and services to the Note plus adding all the beauty and stability of Ice Cream Sandwich. The "Premium Suite" update also brought a lot of stylus-friendly tweaks, making the pen even simpler and more powerful.

A huge software upgrade made the Note even better

Good things come to those who wait, so T-Mobile users will get all the Note's newest features and apps from day one. Unfortunately, buyers also get year-old hardware: the Note's 1.5GHz dual-core Snapdragon S3 processor, 1GB of RAM, and 16GB of internal storage are all unchanged from older versions of the handset. The processor is the biggest frustration — it's not a bad or underpowered SoC by any stretch, but it's now far from cutting-edge. Qualcomm's Snapdragon S4 is faster and more power-efficient than the S3, and we've seen quad-core chipsets from Nvidia and others as well.

That plays out in both our benchmarks and my own practical use. I've quickly grown used to the instantaneous reaction to button presses or swipes on the Galaxy S III or the Nexus 7, and the Note is always a half-beat behind. Rotating the screen takes a bit longer, and animations stutter ever so slightly — these are problems you'd likely never notice had you not tried a more powerful phone, but if you walk into a T-Mobile store and test both the Note and the Galaxy S III you'll feel them right away. The T-Mobile variant also scored slightly lower than the Note we reviewed last year, though not so much lower as to be a problem.

With cellphone hardware, a year is an eternity

One thing that hasn't left the Note behind is call quality, which is very good. Now, you could argue that you don't want to hold such a huge phone up to your head, but if you do so you'll be mostly happy with the experience. Calls are clear and loud, though callers did report me sounding a little bit shallow at times. Noise cancellation is excellent, but I suspect it's also clipping your voice in the process. Reception was excellent, too — T-Mobile's network isn't as expansive as AT&T's or Verizon's, but I've found that where HSPA+ service exists, it's very fast and reliable. I saw download speeds up to 13Mbps and averaging 9-10Mbps, while upload speeds hovered in the 1-2Mbps range. Even where there's no T-Mobile data to be found, you can make calls using Wi-Fi calling, which is totally seamless and a really clever way to avoid T-Mobile's coverage gaps. 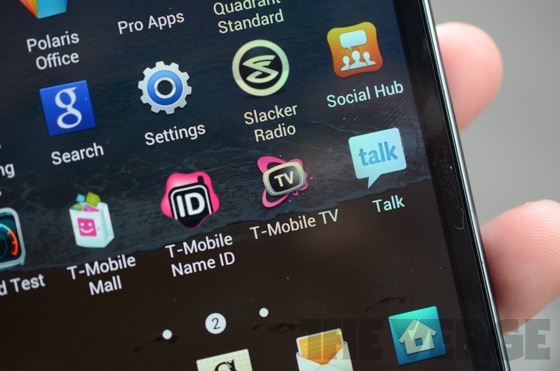 T-Mobile's bloatware is fairly consistent across devices, so current customers will be familiar with most of what the carrier adds: there's a 411 app, a handful of apps related to your T-Mobile account, the handy T-Mobile Hotspot for tethering your phone to another device, T-Mobile TV, and a few more. Then there's the standard group of third-party apps, like Polaris Office, Zinio and Netflix, that seems to be unavoidable on any phone.

Inside the enormous Note is an enormous battery, measuring 2,500 mAh. In my testing it wasn't quite the two-day affair that Vlad discovered on the international Note, but never once did I have trouble getting through a full day of battery life, and I could often go to about lunchtime the next day before needing to recharge.

Still a good phone, but better is both already here and right around the corner

The Galaxy Note was a great device last year, and it's still a good one now. Trouble is, there's no good reason to buy it right now. The Galaxy S III is a better, more powerful phone (with nearly as big a screen), and T-Mobile has a couple of other solid smartphones as well. Even if you're sold on the size and pen input on the Note, we're all of three weeks away from the announcement of the Note's successor at IFA 2012. There's no way to know when (or if) the new Note will come to T-Mobile customers, but it's definitely worth putting off your phone purchase until Labor Day or so just in case.