Finally, there's a hoodie that can text your mom

Finally, there's a hoodie that can text your mom

Wearable electronics don't just have to go on your wrist or your face, it turns out: students in New York University's Interactive Telecommunications Program (ITP) have designed what they call the "Smart Hoodie," a hooded sweatshirt with a GSM radio sewn in that can respond to different gestures. The creators show three of those gestures in their demonstration — touching the hood, touching a sleeve, and rolling up a sleeve — each of which send a different text message to a pre-programmed contact. 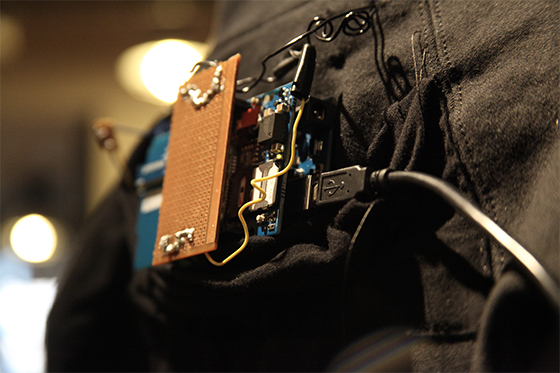 The demo focuses on staying connected to family members, but it's easy to see how clothing connected to the cell network could have more utilitarian uses: take text-to-911, for example, which is in the middle of rolling out and could offer wearers the ability to covertly notify emergency services when they know they're going to be walking through a bad area. It might seem like a niche product, but big players are already exploring the softer side of wearables: Intel showed off a connected shirt at Recode's Code Conference recently, and Google's Advanced Technology and Projects (ATAP) group has taken it a step further with talk of electronic tattoos.

Of course, there are questions that aren't yet answered for the Smart Hoodie — washing it and easily moving its electronics between outfits are exercises left for a more production-friendly model — but by today's standards, the concept doesn't seem particularly far afield of reality.