Apple's new US design patent number D661,296 broadly covers a thin notebook having a wedge or teardrop profile, but we'll have to wait and see how, or if, it's used to restrict new ultrabook designs.

It's been pretty easy to look at recent Apple design patents and see that they haven't carried with them the broad patent coverage many might think, but that isn't the case with Apple's new US patent — D661,296 — that issued on Tuesday. While a recent patent rumored to be on the Macbook Air design turned out to be a dud, covering only the bottom feet of the device, the 'D296 patent is much different. This patent is clearly intended to broadly cover the distinctive wedge or teardrop profile of the notebook.

With design patents it's all about the drawings. There isn't much in terms of a written description to go by, so the nuances of the drawings define the enforceable protection of the patent. And as always, the coverage centers around the details of the solid lines in those drawings. The dashed lines provide context, but do not at all define what is patented. In determining infringement, courts look at whether the allegedly infringing device and the design patent are substantially similar in overall appearance to an "ordinary observer," excluding minor differences. You can see below how Apple has dashed out the unimportant details of the notebook, like the rear contour, hinge, side ports and feet, and instead focuses on the overall wedge shape and look of the device with solid lines. That's the aesthetic Apple has patented here and a notebook with hinges, feet or a shaped back different than the MacBook Air could still be infringing as long as the rest — primarily the claimed wedge profile — is substantially similar. On the other hand, competitors can still rely on meaningful tweaks to the angles, shapes and proportions of their notebook designs to avoid the patent — that's how patent design-arounds work. 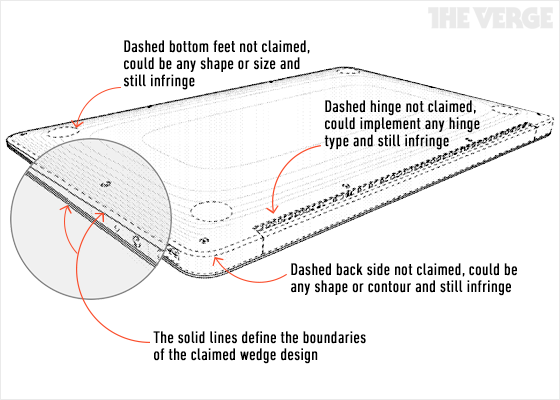 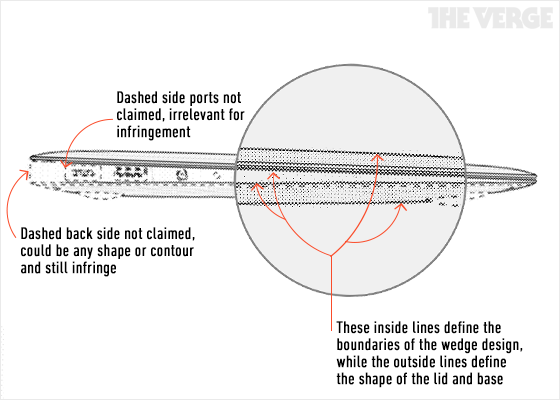 While there are certainly going to be some noticeable differences between Apple's design and other notebooks in the market, let's not forget how aggressively Apple has used its design patents against competitors in the smartphone and tablet space. And given just how much we're starting to see this wedge look in ultrabooks like HP's Envy Spectre and the Asus Zenbook we certainly wouldn't be surprised if Apple decided to wave its new patent around a bit. We'll just have to wait and see what happens.