A screen in your trackpad is more useful than you think

Share All sharing options for: A screen in your trackpad is more useful than you think

People don’t really like it when companies replace physical controls with touchscreens. Many modern cars are loaded with touchscreens for everything from climate control to stereo volume to the wiper controls in the case of Tesla’s Model 3. Most would argue that using a touchscreen for those tasks is more cumbersome and difficult than the tried and true buttons and dials of yore. Perhaps the touchscreen that has received the most vitriol is the Touch Bar on Apple’s MacBook Pro, which replaces the entire top row of function keys with touch controls that are constantly changing. Needless to say, the Touch Bar has been largely disliked.

So, I had few hopes for the ScreenPad in the new Asus ZenBook Pro 15 laptop. The ScreenPad is a full-color, 5.5-inch 1080p touchscreen jammed into the trackpad of the ZenBook Pro. Picture a smartphone turned on its side and embedded just below the keyboard of a laptop and you basically have the idea.

If you have had any experience with Apple’s Touch Bar or anything similar to this, you’d probably expect it to not work very well, not be very useful, and ruin the trackpad experience, which is so crucial when using a laptop. Reader, I’m here to tell you that the ScreenPad is none of those things. It works surprisingly well, it has some actually useful features, and, most importantly, it doesn’t get in the way of the trackpad doing standard trackpad stuff.

Our review of Asus ZenBook Pro 15 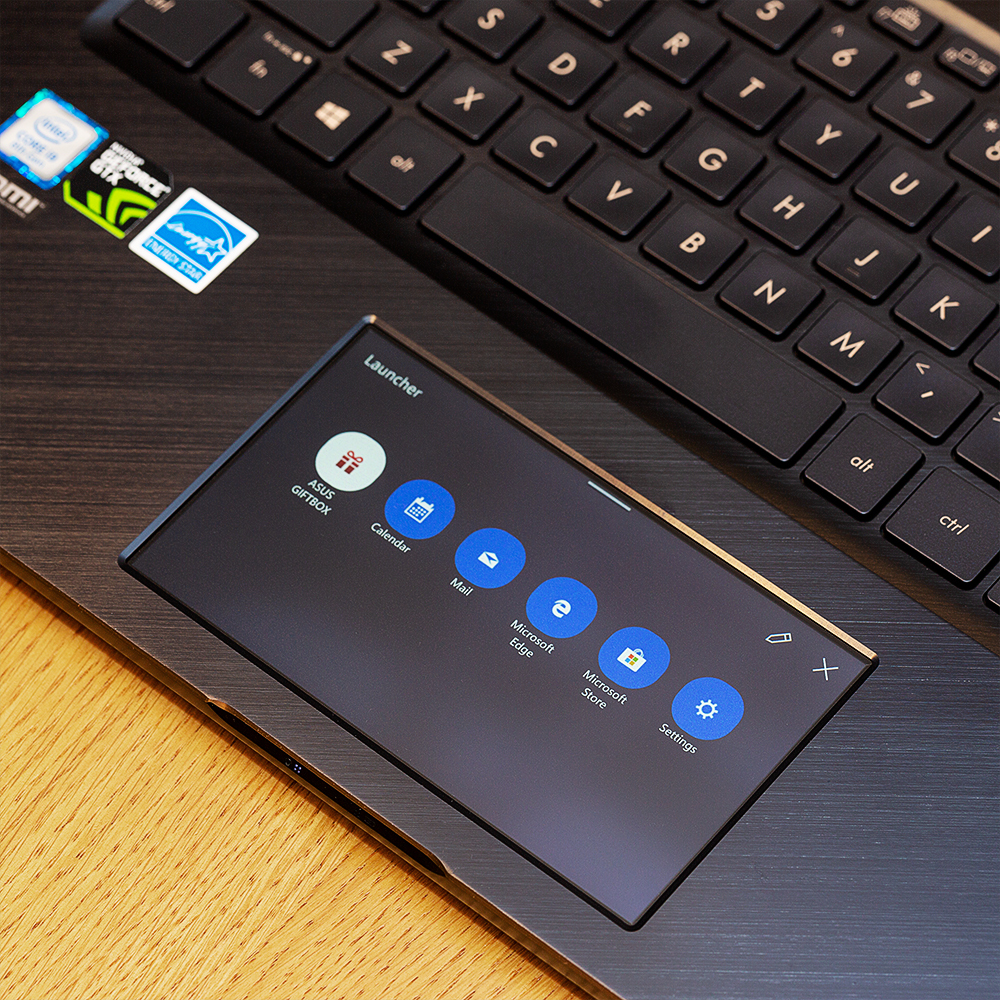 Here are the basic things the ScreenPad can do:

Some of those functions are more valuable than others, and not all of them work spectacularly. My favorite feature is the YouTube controller that works with a special Chrome extension. It’s great to be able to just skip an ad without having to move the pointer over it or even take my finger off the laptop’s deck. The calculator, number pad, and customized toolbars are also useful if you do a lot of data entry or live in Office apps all day.

The ScreenPad whiffs on the music playback controls, but part of that is because Asus decided to remove the play / pause / skip media controls from the top function row of the keyboard, which basically every other modern Windows laptop has. That means that if you want to pause your Spotify music or skip a track, you have to either go to the full Windows Spotify app and do it there, or go down to the ScreenPad, select the app, and then tap what you want. It’s very tedious, especially if you have to do it often.

And then there’s the secondary display feature. This is perhaps the most show-offy part of the ScreenPad: you can literally have it be the world’s tiniest secondary display for your laptop. You can move Windows down there and play a video if you want, but the size of buttons, icons, and text is so laughably small, I can’t imagine why anyone would do this. Also, in this mode, the touchscreen part of things doesn’t map directly to where your finger touches, so in order to click something on the secondary display, you have to move the mouse pointer over it and click, which is laughably tedious.

Aside from the obnoxious Spotify controls and the silly secondary display feature, the ScreenPad doesn’t force you to change anything else about how you use the trackpad. The trackpad is still a smooth, matte finish Windows Precision trackpad that supports all of the usual multifinger gestures you’d expect. You can even turn off the “screen” part of the ScreenPad, and it will just look and act like any other trackpad on any other laptop.

Not forcing you to change how you use a laptop or interfering in how basic computer input functions work is the smartest thing Asus did with the ScreenPad, and it’s what separates it the most from Apple’s Touch Bar.

The one thing that the ScreenPad doesn’t (and, if I’m being fair, can’t) do is make up for the rest of the ZenBook Pro 15, which is an overpriced, not-very-good laptop. The panels are flexible and get covered in fingerprints in seconds, the battery life is abysmal, and even though it has a beefy Core i9 processor and discrete Nvidia GTX 1050Ti graphics card, its poor thermal management means you don’t get to take advantage of all of that power. It’s not a laptop I’d recommend anyone spend $2,300 on.

On the other hand, the ScreenPad is interesting and works surprisingly well. Right now, its functions are limited and there isn’t a ton you can do with it. But the basics are here, and if Asus is able to figure out some more uses for it, the ScreenPad might be something you’ll want on your next laptop.

Hopefully, that next laptop is a better one than the ZenBook Pro 15.