Theranos isn’t alone in avoiding regulation using an easily exploited loophole — in fact, it’s just one among many.

Pathway Genomics, Admera Health, and Strand Life Sciences are diagnostics companies that offer cancer tests that impact people’s health care decisions. None of these companies have published data about their tests in peer-reviewed journals. Nor were any of these companies required to show regulators that their tests worked before they started marketing them to patients and physicians. That’s because each of these companies has been making use of what's known as the "laboratory developed test" loophole — which makes avoiding pre-market verification downright easy.

Each of these tests are positioned to influence crucial health decisions

Each of these diagnostic tests are positioned to influence crucial health decisions: a positive test result from Pathway Genomics might encourage someone to seek treatment for a disease that will never develop; results from Admera Health and Strand Life Sciences might make someone favor one cancer treatment over another. But what patients might not know is that every single one of these companies was able to start selling their tests without first proving to regulators that their results were accurate.

Under the LDT loophole, any company that develops and conducts a diagnostic test in their own lab — or in the case of Theranos, in multiple labs — can avoid submitting that test to the FDA before using it on patients. This get-out-of-regulation-free card exists because research hospitals often modify commercial tests. In the case of these hospitals, the academic researchers tend to publish their results anyway — so it’s less of a big deal that they don’t get clearance first.

But a few years ago, startups figured out that they, too, could benefit from the LDT loophole. If they conducted all their tests in-house instead of trying to sell them to other labs, they wouldn’t have to verify their claims with regulators before they launched a test.

Publishing means "their competitors would see it."

The LDT loophole was perfect for any company that wanted to keep their methods secret; there’s no rule that says that a company that makes an LDT should publish its data for all to see. "Their intellectual property is know-how and that’s something that they want to keep as trade secrets," says Michael Murphy, president of Conatus Consulting, a medical device regulatory consulting firm. "They wouldn’t want to publish the formula for their tests, because then their competitors would see it."

And so, companies that take the LDT path can operate with very little oversight. As long as their laboratories pass inspections by federal regulators, they can keep launching new tests. Silicon Valley’s favorite motto is "move fast and break things" — but people aren’t things. And if these tests don’t work, it’s the people who will wind up broken.

"The company is planning to conduct clinical trials."

Strand Life Sciences is a genetics company based out of Colorado that was founded by four computer scientists. The company has a test called StrandAdvantage that it claims can be used to detect genetic mutations that drive cancer growth — in just a few days. These mutations can then be used to help doctors and patients decide what cancer treatments a patient should undergo. The company has presented results from a study at the 2015 American Society of Clinical Oncology annual meeting, but Todd Davenport, press contact for Strand Life Sciences, said that he didn’t think the company had published anything in peer-reviewed journals about it. He couldn’t confirm this, even after repeated emails and a phone call. Our own search didn’t turn up any studies that covered this test. "We do know the company is planning to conduct clinical trials," Davenport said.

This has not stopped Strand Life Sciences from marketing the test, however. According to the company’s website, it’s a "complete solution for personalized cancer care." 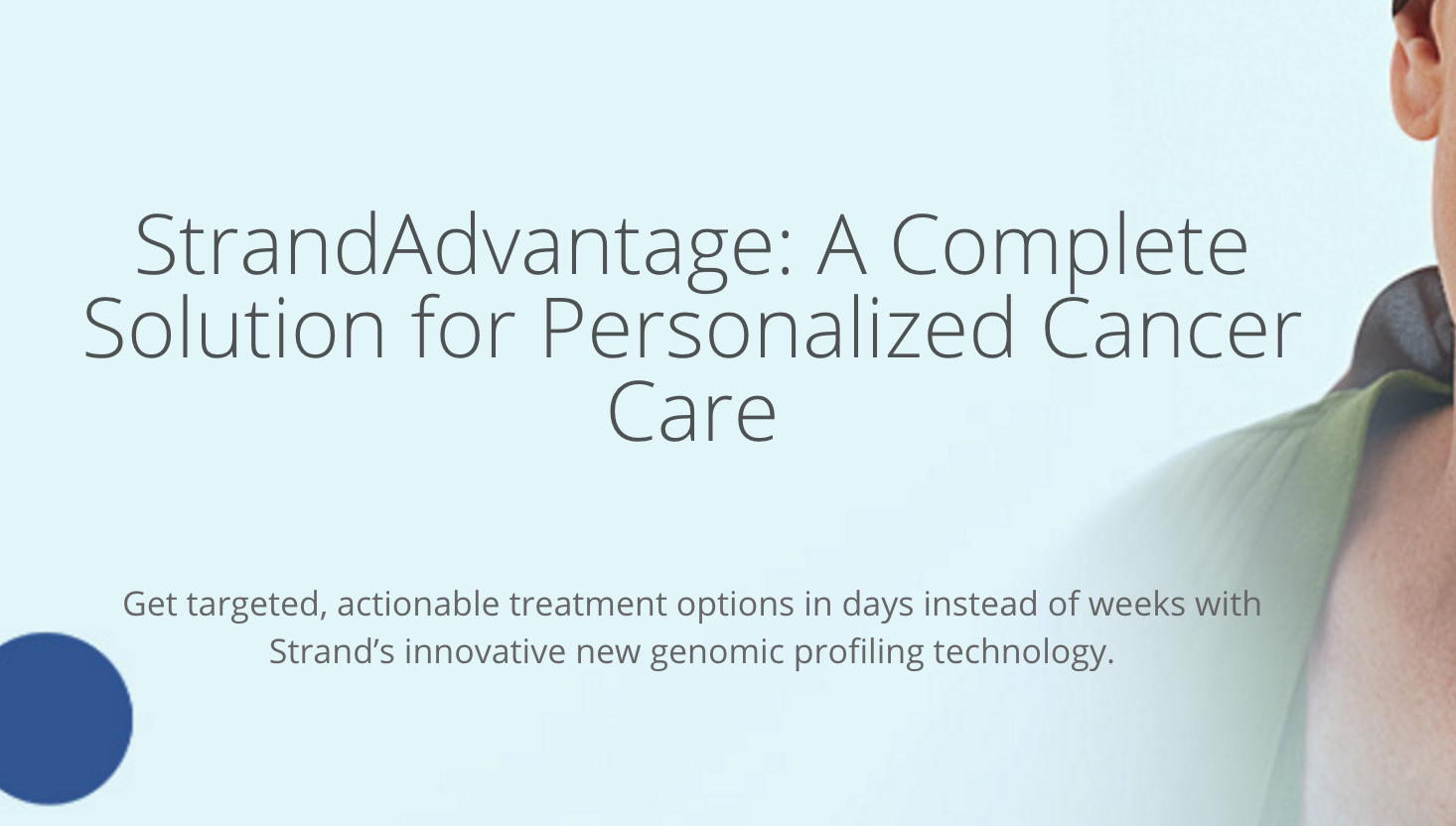 In September, a California startup called Pathway Genomics released a blood test that it said could detect cancer cell DNA. But when The Verge got in touch with Pathway Genomics, the company couldn’t provide any data to support the validity of the $699 test. And the reason it couldn’t provide the data isn’t because the company wanted to protect some trade secrets. Pathway Genomics had actually decided to start selling their test without making sure it worked, first. We know this because we asked Glenn Braunstein, chief medical officer at Pathway Genomics, about it. He told us that the company has yet to complete a trial that could show that people who test positive for markers of cancer in their blood actually do develop cancer. So, the tests’ manufacturers have no way of knowing their test is remotely accurate.

The tests' manufacturers don't know if it's accurate

Predictably, Pathway Genomics had not sought FDA approval prior to launching its test, called CancerIntercept. The company’s CEO, Jim Plante, was happy to tell us that Pathway’s test was a lab-developed test regulated under the Clinical Laboratory Improvement Amendment — the same law that applies to Theranos. Under CLIA, labs have to be inspected once every two years; they also have to undergo proficiency testing to see how their products measure up to tests offered by other companies. But again, all that stuff happens after a company begins to use their test on human beings.

Following The Verge’s reporting, Pathway Genomics received a letter from the FDA. The letter pointed out that the test "had not received adequate clinical validation and may harm the public health." The FDA then went on to ask to meet with Pathway Genomics. This exchange took place in September, but a visit to Pathway’s website suggests that it’s still possible to place an order for the test.

The Verge called and emailed Pathway Genomics multiple times for comment; we have yet to hear back.

OncoGXOne is a genetic test that was developed by a New Jersey company called Admera Health. This test can be used to detect "potentially actionable cancer-driving [genetic] mutations, which can be targeted by specific therapies," according to a press release. But, much like Theranos, Admera hasn’t bothered to publish studies that support their claims in peer-reviewed journals. So, if a patient wants to verify that this test really can detect "64 genomic alterations critical to cancer" in just 10 days, she has no resources to fall back on; she has to take Admera’s word for it.

That isn’t the only thing worth noting about OncoGXOne, however. Unlike many companies who develop LDTs, Admera isn’t the company that’s selling and marketing this test. Another company, called Rosetta Genomics, takes care of that. "We have an arrangement with Admera whereby we promote this test to oncologists and pathologists, and Admera runs the test," Anne Marie Fields, press contact for Rosetta Genomics, wrote The Verge in an email. "We pay a transfer price to Admera and we bill and collect from the patient’s insurance." Fields also confirmed to The Verge that Admera Health had not published any studies about the OncoGXOne test.

The arrangement between Admera Health and Rosetta isn’t unusual, Murphy says — and it’s not an FDA violation either. "The LDT regulation says that the test has to be designed and developed within a single laboratory, but it doesn't say that another company can't go out and recruit physicians and patients to get access to the test," he says — "it doesn’t say it’s forbidden." And so, if a company decides to make an LDT to avoid pre-market testing, it can also find ways to act like commercial test manufacturers. All that company has to do is make sure that their marketing partners don’t handle the test themselves. And that’s exactly what Admera Health is doing now.

The FDA declined to comment on the arrangement between Admera Health and Rosetta Genomics. Admera Health’s vice president of business development, Brady Millican, didn’t answer our emailed questions and didn’t return our call.

Though they aren’t worth billions, and The New Yorker hasn’t fawned over their founder, these companies aren’t all that different from Theranos; each has found a way to market medical tests without first showing regulators that their tests work. And in some ways, avoiding the media’s attention is key to their success. If journalists hadn’t written about Pathway Genomics or Theranos, the validity of their tests might not have been put into question because the LDT system is built around efficiency — and lacks oversight.

That may be fine for research hospitals that want their methods to be used elsewhere — but not for for-profit companies. Moving fast and breaking things won't help people get healthy; the adage in health is "first do no harm," in fact. The FDA knows this — even they’ve been calling LDTs a loophole — and the agency wants to change the way these tests are regulated. Even Theranos, which has used the loophole, supports closing it. But until that loophole closes, we’ll keep seeing companies using the LDTs as a dodge, because it’s a simpler and cheaper way to get to market. The real expense, of course, is patients’ health.

Update 3:35PM EST: This story was updated to reflect the fact that Theranos has said publicly that it supports closing the LDT loophole. The company sent us a statement in response to our story. It says: "While others in the industry were contemplating a lawsuit to stop FDA from closing the loophole, Theranos went on record to support FDA’s efforts."

More from this stream Theranos: the latest news about the controversial blood-testing startup