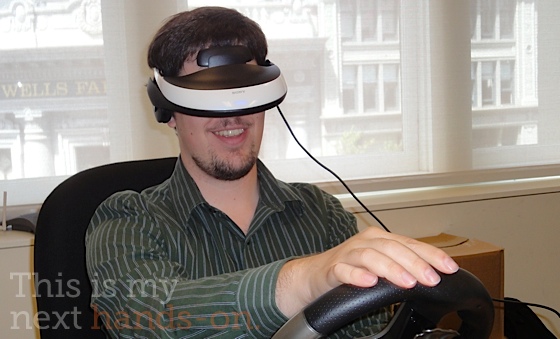 Geordi La Forge may not be scheduled to don his replacement eyesight for another 329 years, but Sony's the latest company to take a stab at the basic idea: this October, it's making the 3D head-mounted display we saw at CES into a commercial reality. Sony's calling it the "Wearable HDTV," and that's a fairly apt description -- the $799 HMZ-T1 boasts a pair of OLED screens that simulate a 150-inch HDTV at 720p resolution, and provides virtual 5.1 surround sound from attached stereo drivers that lightly brush your ears. Of course, since you've got an OLED display for each eye, that also makes the headgear a pretty killer way to view 3D content without any of the crosstalk and/or flickering inherent to most other 3D displays... as I found out when repeatedly exploding my way through MotorStorm and watching a sizable sample of Despicable Me. Read on for our full preview! 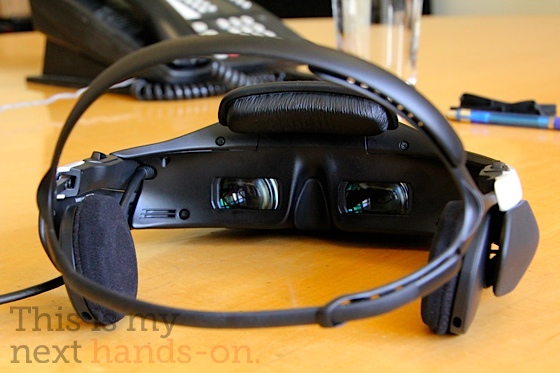 I have to admit, my very first impression of the Wearable HDTV wasn't quite as pleasant as I'd hoped. I wouldn't call the prototype headgear heavy by any means, as it's a fairly light plastic build all told, but the 14.8-ounce headset is definitely front-heavy and not necessarily easy to fit the first time you put it on. Sony reps told us that the company went through many focus groups to find a fairly universal design, and there's definitely plenty of adjustments to help fit it to your skull -- headstraps, earphones and eyepieces alike can all be moved around, there are padded nose bridges too, and once you've sized it just right, ratcheting quick-release straps can help you cinch it down again. (There are also four directional buttons and a select key on the bottom panel that let you adjust video settings, and even control your connected PS3 or HDTV with the HDMI-CEC protocol.)

Even after a variety of tweaks, however, my head wasn't completely comfortable with the prototype after a half-hour of use, as much of the unit rested on my nose during my brief session. There are other physical limitations, too, as the headset is tethered to a box from which it pulls its HDMI 1.4 signal and power, which restricts reach a bit, and I found the room needed to be fairly dark to avoid visual distractions. The eyepieces reflect ambient light coming in through the sides of the unit, and the clip-on light blockers that Sony provide only slightly ameliorated that issue. 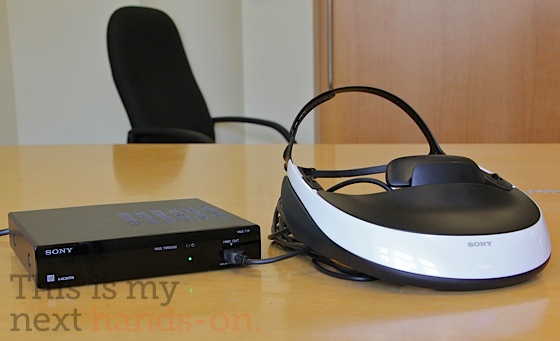 The HMZ-T1's audio wasn't particularly noteworthy, about what you'd expect from a set of modest headphones, but the viewing experience was nothing short of stunning: those twin 0.7-inch OLED displays shot out deliciously crisp images with deep blacks and beautiful vibrant colors. If you've admired the OLED screens on high-end smartphones, imagine an entire big-screen television -- or the center row of a small movie theatre -- with those organic light-emitting diodes providing their signature glow.

Blu-ray adherents used to 1080p content might sneeze at the 720p resolution, but it's perfect for most of today's console games, which typically run at 720p or smaller frame sizes to maintain playable framerates. Speaking of games, PlayStation 3 titles looked great, though you shouldn't expect anything akin to virtual reality here: the headset doesn't do any sort of head-tracking, which seems like a bit of an oversight. I found myself looking to the left and right when taking turns in Gran Turismo 5, to no avail. All in all, there are plenty of compromises here, and for the $800 price I'm hoping a few of them get fixed before it hits Sony Store shelves late next month... but either way, I'm definitely looking forward to reviewing one.