Anki Drive, the real-world racing game that uses your iPhone as the controller, is expanding its lineup today to include new cars, tracks, and a more traditional racing mode. After launching last year with four cars, Anki now offers speed-demon named Hadion and a tank-like bruiser named Corax. The add-on cars will start selling for $69.95 today on Amazon and at Apple stores in the United States and Canada. In an unusual twist, players who buy Corax will not be able to play as him until they defeat the car in battle with the artificial intelligence set to "medium." "You have to earn that right by first beating him in battle mode," says Mark Palatucci, Anki's co-founder and chief product officer.

Starting next month, players will get the option of buying new tracks to go along with those new cars. On May 6th — the same day Anki goes on sale at Best Buy stores — Anki will begin selling $99 expansion racetracks codenamed Crossroads and Bottleneck. Crossroads is a tilted figure 8; where the loops intersect, collisions are all but guaranteed. Bottleneck contains a narrow passageway near its finish line that fits only one car at the time, leading to high drama at the end of races.

Collisions are all but guaranteed

About that finish line: Anki Drive is finally getting an old-school racing mode to go along with its existing battle mode, where players would win by disabling their opponents a set number of times using virtual weapons controlled by the iPhone. In racing mode, weapons are still of high strategic value, but the objective is to be the first to complete a set number of laps around the track. The traditional mode, which arrives as a free software update, was among players' most-requested features, Palatucci says. I played both tracks this week, trading wins with Palatucci, and found them both more challenging and more fun than the simple loop track that ships with the starter kit. 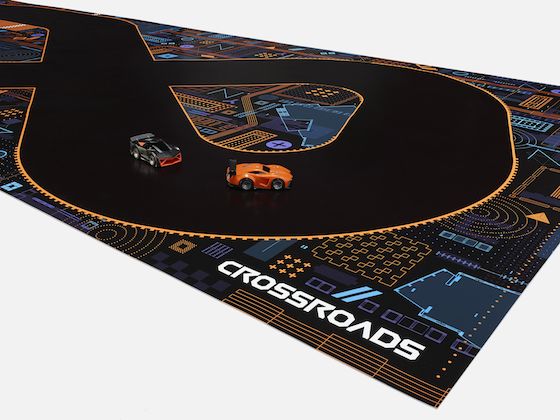 Anki won't say how many units of their $199.99 starter pack they sold since debuting as an Apple exclusive in October. But Palatucci says the company is pleased with its progress, and that expanding to Best Buy and other stores this year will help the company grow its base of users. It's also looking at an eventual expansion to support Android devices. "We're looking very hard at it," he says. In the meantime, fans of the racing game have several new ways play — as long as they're willing to pay the not-insignificant cost of the new cars and tracks.