Duet Pro turns your iPad into a high-end Wacom tablet

Duet Pro turns your iPad into a high-end Wacom tablet

If you've never heard of Duet Display and you're the owner of an iPad, do this one good thing for yourself and download it immediately. Yes, it's $20, but that's a steal for an app that lets you use your Mac or Windows PC as a second monitor, making you feel like a multi-tasking wizard. Plus, the app is temporarily on sale for the next week at $10 to promote the new Pro version of their app, which adds pressure and tilt sensitivity. The update is aimed at artists to use as a professional graphics tablet, like a Wacom.

I've been on the fence about getting a Wacom Cintiq for a while now, and the hardest part for me is justifying the cost. The cheapest version of the tablet is the $800 Cintiq 13HD, and my imposter syndrome tells me it's insulting to real artists for a cartoonist like me to even think about using such a powerful device, when a cheap $100 Wacom Bamboo works just fine.

When the iPad Pro was announced with the Apple Pencil to underwhelming response, I was hopeful about the possibilities. That excitement quickly faded when I tried out the Pencil and realized the iPad's drawing apps could never replicate all the features of desktop programs. That's why Duet Pro felt like such a fresh alternative, because I could actually draw on an iPad using the programs I was used to, like Manga Studio 5 and Photoshop.

I was surprised by how well the app worked with the Pencil — the pressure sensitivity worked great and my brush strokes looked nearly identical to how I normally draw on my Macbook Air with a five-year-old Wacom Bamboo tablet. Here's a picture I drew using Manga Studio on the iPad: 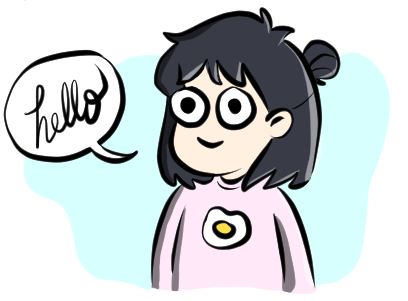 Still, there were minor inconveniences like the apps not snapping to the iPad screen (though this is a feature that can be enabled on macOS) and sometimes losing things in the void when dragging programs between monitors. And the price — it's $20 for a yearly subscription that you'd have to use on a $799 12.9-inch iPad Pro (drawing on anything smaller would be a hellish experience for professional artists) and the $99 Apple Pencil. It puts the whole experience at around the same cost as getting a Cintiq, so we're back at square one. I love Duet Display for being good at its original job and I'll continue to use it to watch YouTube at twice the efficiency, but Duet Pro might not be for me. Maybe it can be for you, person who already owns an iPad Pro with the Apple Pencil and occasionally doodles for fun but expects nothing more!