The best home security system you can install yourself

Secure your home without breaking the bank

Share All sharing options for: The best home security system you can install yourself

The do-it-yourself home security market has exploded over the past couple of years and for good reason. It’s now possible to install a fully monitored security system in your home in as little as 15 minutes and for hundreds of dollars less than it would cost for a traditional security system. In addition, these systems are not permanently wired into your house, so they are ideal if you’re renting or plan to take them with you when you move. They can even be installed in apartments with ease.

A good home security system is able to monitor the entry points to your home, such as doors and windows, look for motion inside your home, sound a loud alarm, and be able to call authorities if you’re not home and the alarm is triggered. It should also be able to monitor for fires, water leaks, and other emergencies when you’re away from home. Finally, a good home security system is easy to arm, so you’re encouraged to actually use it, and easy to disarm when you get home.

In addition to monitoring your home’s activity with door sensors and motion detection, many home security systems also support cameras, either inside or outside your home. This is a nice feature to have if you want to build a complete security system, but cameras aren’t necessary if you just want to secure your home from intruders or monitor for emergencies.

One thing that is necessary is a professional monitoring option, which is available on all of the best home security systems. These monitoring plans require monthly subscription fees that vary in price, but they are still cheaper than traditional home security plans. Further, having a monitored security system installed in your home also qualifies for a discount on most home insurance plans, which can offset some of the cost of the subscription fee. (In my experience, the discount on my home insurance covered about 25 percent of the subscription of an average plan, but your mileage may vary depending on your location and the size of your home.)

All of the self-installed systems I tested can function without a monitoring plan, but then they are limited to just sounding an alarm inside your home and in some cases, pushing a notification to your phone and lack the ability to automatically dispatch authorities or emergency personnel. Since phone batteries die and cellular service varies depending on where you are, a push notification is generally a poor method of triaging when your home security system has been tripped.

This article will be continuously updated as new systems are released and we’re able to test more, so if you’re not ready to jump on a home security system or you’re not happy with the options available right now, be sure to check back in the future.

When you tally up all of the things that quality for a great do-it-yourself home security system, there’s one option that stands out from the rest and that’s SimpliSafe. SimpliSafe offers the most comprehensive system in a box, without being the most expensive. It is easy to install, has some of the most discreet interior sensors for doors, windows, and motion, and integrates with other smarthome gadgets like Nest thermostats and August locks, as well as virtual assistants like Amazon Alexa.

SimpliSafe’s system consists of a base unit with a speaker, a battery-powered keypad that can be placed or mounted anywhere, door / window sensors, motion sensors, glass break sensors, auxiliary sirens, freeze sensors, water sensors, smoke detectors, and even a panic button. In addition to the keypad, you can arm the system with Alexa, SimpliSafe’s mobile app, or a keyfob, and you can disarm it with the app or the keyfob.

The base unit is the main hub of the SimpliSafe system, and though it needs to be plugged in to a power outlet, it has a 24-hour backup battery in case of a power outage. It also connects to the internet through either its built-in cellular connection or your Wi-Fi network, so you do not need to plug it into your router and can place it anywhere in your home. The base station has a 95db alarm — the optional auxiliary siren screams at an ear-piercing 105db.

SimpliSafe sells various size kits depending on your needs. The basic kit offers a base station, keypad, single door / window sensor, and motion sensor, while the top of the line package has all of those things plus a keyfob, three more door / window sensors, another motion detector, auxiliary siren, freeze detector, water leak detector, smoke detector, and panic button. You can also add cameras or more sensors as needed to the system, as well.

The system will work without a professional monitoring plan, but SimpliSafe offers two no-contract plans that include both police and fire department alerts. The basic $15-per-month plan supports all of the SimpliSafe’s sensors, has 24/7 monitoring, and cellular backup in case your Wi-Fi network goes down. The more expensive $25-per-month plan adds the ability to control the system from your phone, unlimited backup recording for SimpliSafe’s cameras, and smart home integrations. It’s a little frustrating that SimpliSafe gates the smart home integrations and smartphone app behind its most expensive plan, but it’s less expensive than a traditional security system and can be canceled and restarted at any time.

SimpliSafe’s mobile and web app controls are also very basic, and don’t have nearly the design or polish of some of its competitors. They get the job done, but they won’t win any awards for their eye candy. And though SimpliSafe does support setting Nest thermostats to away modes when the alarm is set and integrates with August locks, its smart home integrations aren’t nearly as extensive as some of the other security systems I tested.

In addition, the adhesive on two of the door sensors I tested did not stick well to my doors, requiring me to double up the tape. It remained secured after that, but it was an annoyance during the first day of testing the SimpliSafe. No other system I tested had issues with the mounting tape provided for its sensors.

Our review of SimpliSafe 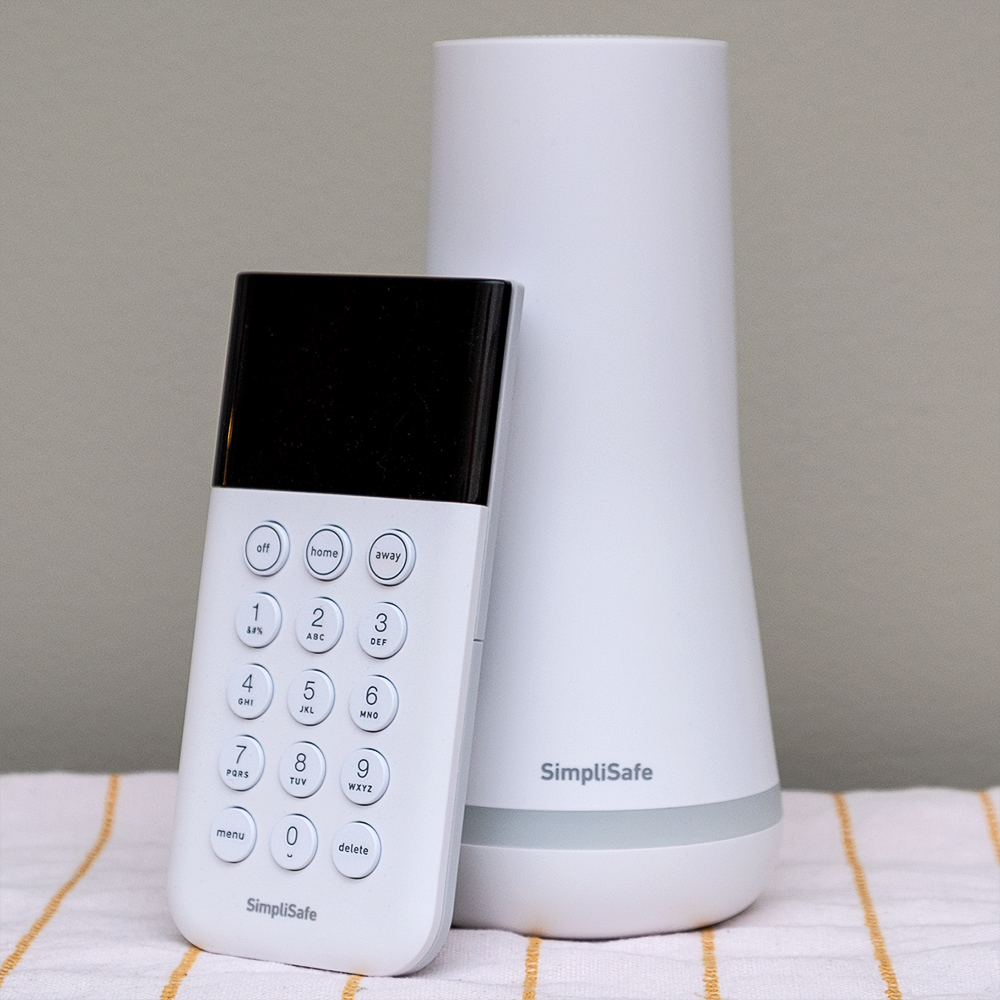 But aside from those things, SimpliSafe’s system is easy to install, easy to use, and covers basically everything you might need from a home security system, without costing a fortune.

If SimpliSafe is just too pricey for your needs and all you want is something that will sound an alarm when someone breaks in through a door or window and call the police or fire department, the Ring Alarm is the next best option. Ring’s system is one of the least expensive, and its monitoring plans are the cheapest you can get.

For less than the cost of SimpliSafe’s kit, the Ring Alarm comes with a base station, a keypad, a single door / window sensor, a motion detector, and a range extender. Additional sensors can be purchased ad hoc, and include a combination flood and freeze detector, smoke / carbon monoxide alarm, extra siren, and a listener device that can detect when your existing smoke detector goes off. Ring also has an extensive lineup of doorbell cameras and outdoor security cameras that integrate with the same app used to control the Ring Alarm.

Ring’s professional monitoring plan is the cheapest you can get at $10 per month and doesn’t have any contract commitments. It includes both police and fire alerts, as well as unlimited backup for any Ring cameras that you also have installed. It also adds cellular backup to the system in case your Wi-Fi goes down.

Our review of Ring Alarm 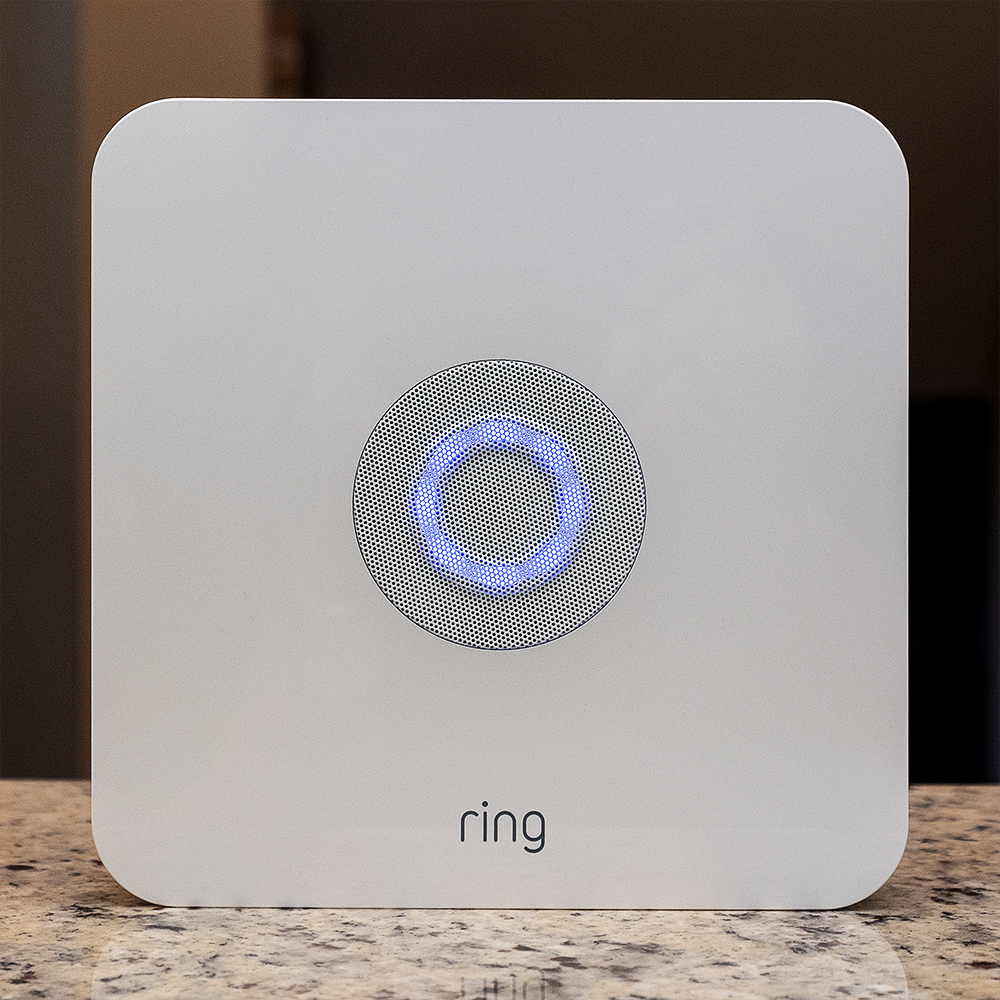 Ring falls short in integrations — even though the company is owned by Amazon, it doesn’t integrate with any other smart home products or services, such as Amazon’s own indoor security camera or the Alexa voice assistant. Ring also doesn’t offer a key fob for arming / disarming the system, which is one of the easiest ways to use these types of alarms, especially if you’re already out the door and forgot to set it.

The rest of the field is more specialized, catering to advanced smart home aficionados or fans of a particular ecosytem of products. Nest’s Secure has the best design of any system I tested, including clever things like integrating the keypad and a motion detector into the base station and combining motion detectors and entry sensors into one unit. But the Secure is expensive, additional sensors are expensive, and the monitoring service — which doesn’t include fire alarms or camera backups — is also expensive if you don’t commit to a three-year contract.

Honeywell’s new Home system actually integrates a complete Alexa speaker and wide-angle 1080p camera into the base station, but it lacks any sort of professional monitoring service. And while Abode is great for deep smart home tinkerers, its setup and hardware is not as easy to use as our main picks.

Our review of Nest Labs Secure 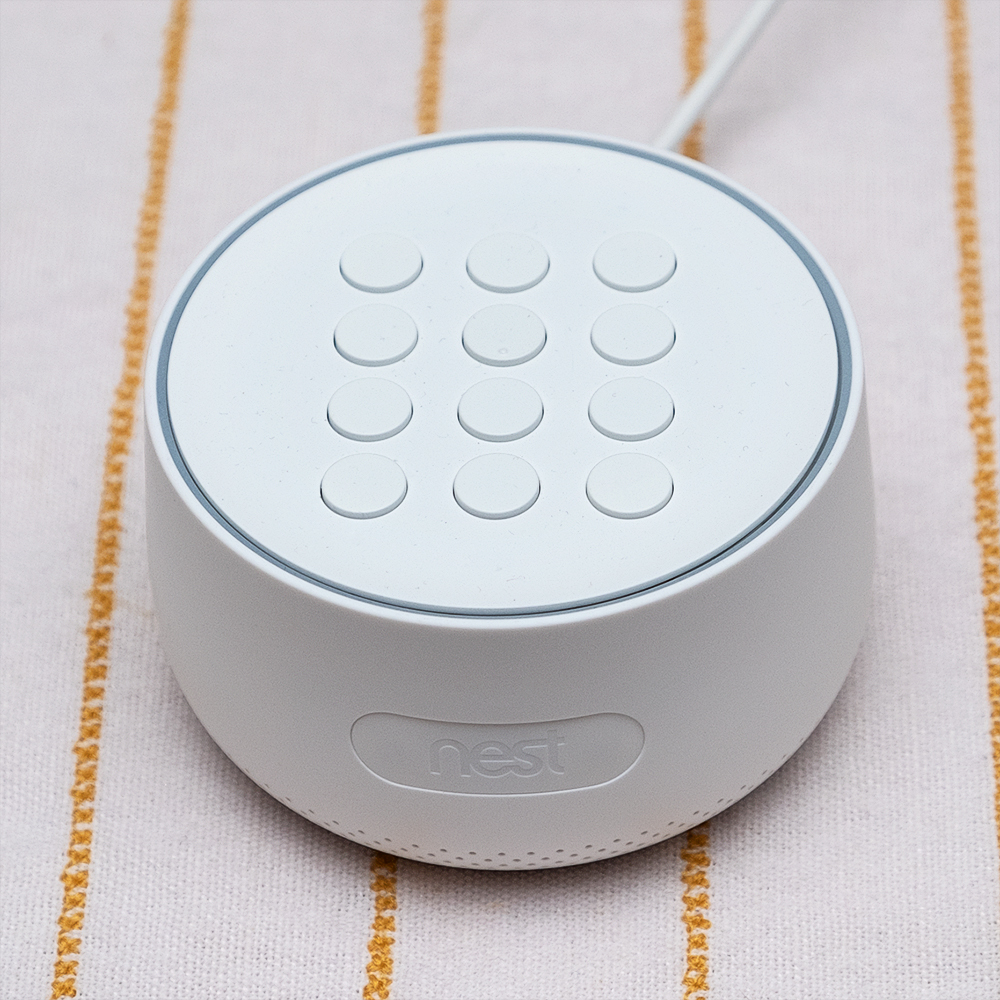 Our review of Abode Systems Abode 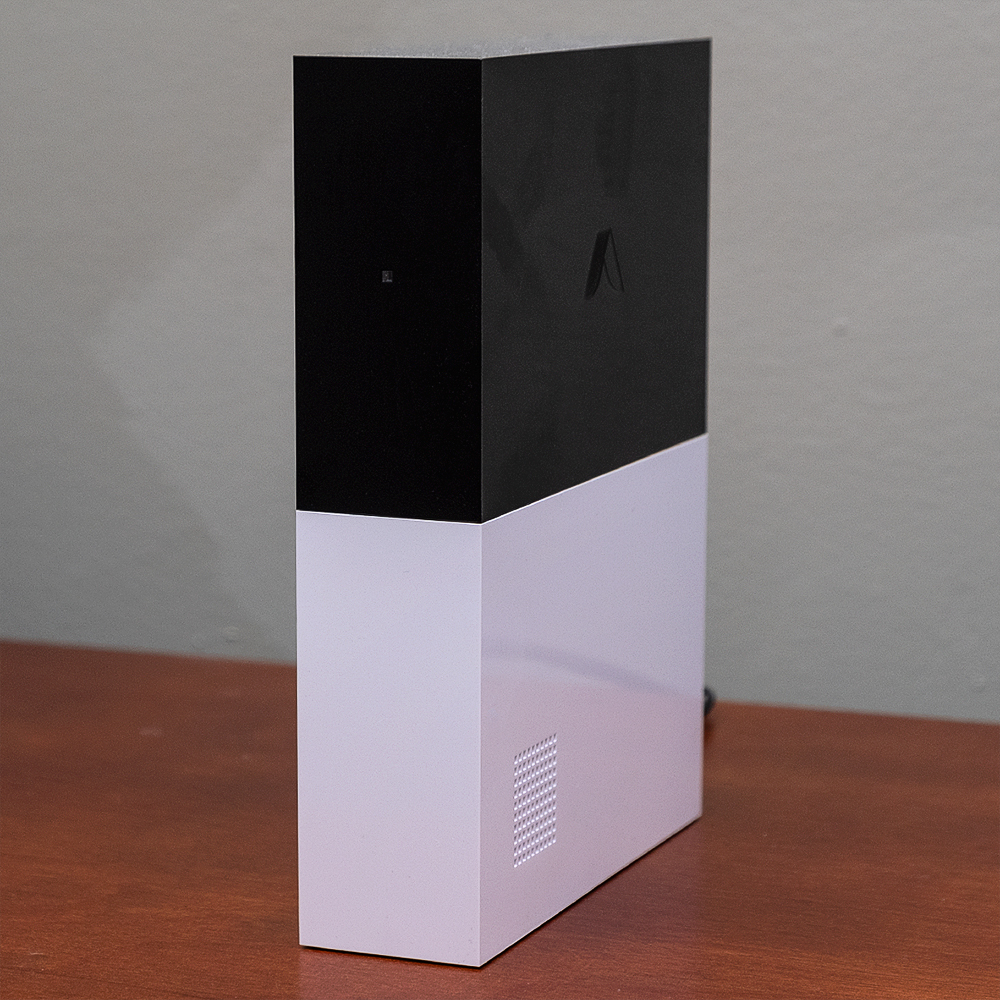 Our review of Honeywell Home 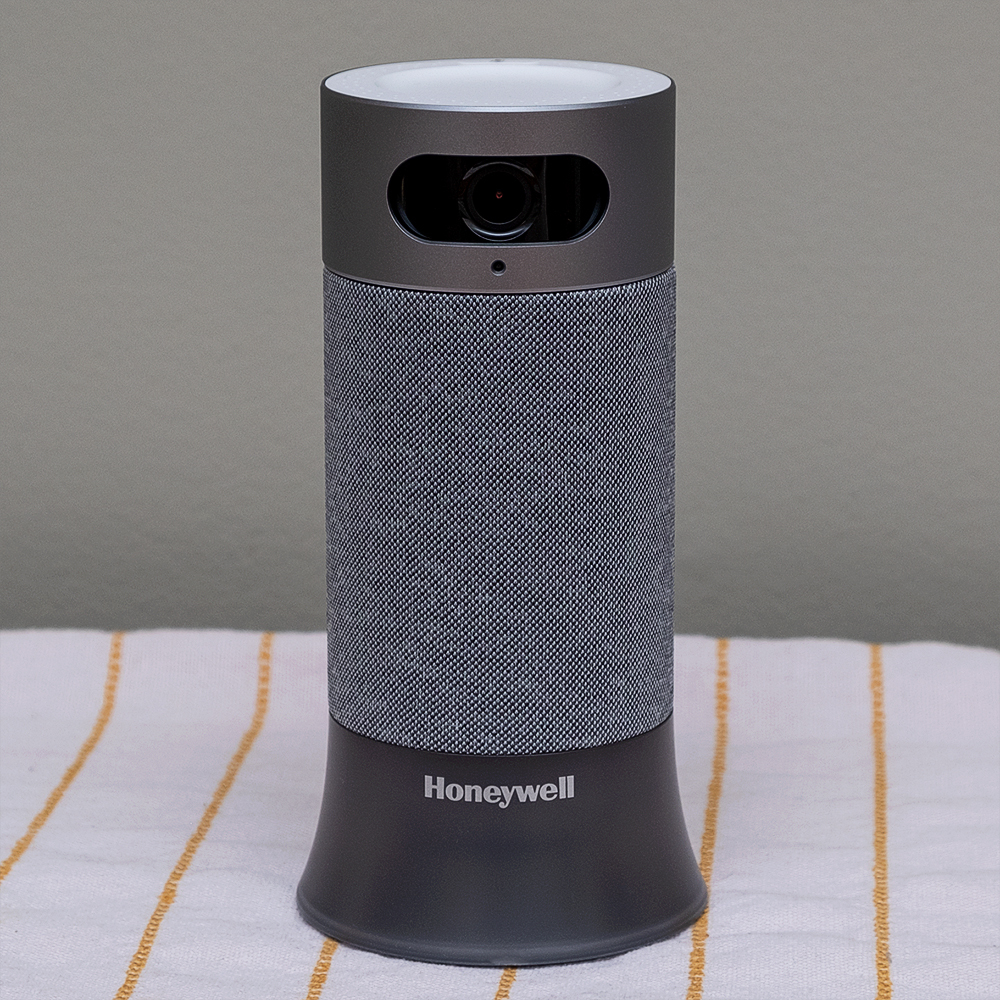