Enough with the flying cars already

Enough with the flying cars already

I love cars. I love aircraft, too. Planes are in my blood: my father and grandfather both owned them, and I've been to EAA AirVenture every year since I could walk (long before it was even called AirVenture, actually). So it stands to reason that combining both to make a flying car is the dream, right?

Not exactly. Don't get me wrong, products like the Terrafugia Transition and the just-announced AeroMobil 3.0 are extraordinarily cool. I might even call the AeroMobil beautiful, in its own strange way. But the problem is that these aircraft don't solve any problems for normal human beings, nor do they even gesture toward a meaningful impact in the distant future. The term "flying car" — or even "roadable aircraft," as some of these companies prefer — oversells their contribution to the future of human transportation by a wide margin.

Let's consider the Moller SkyCar, for instance, as pictured on this 1991 cover of Popular Mechanics (which I subscribed to at the time, and vividly recall receiving this very issue): 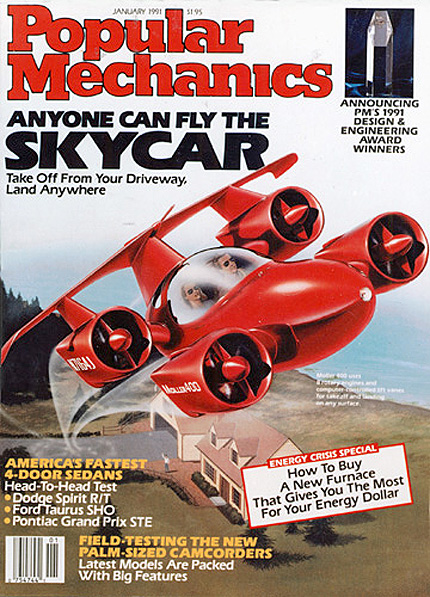 "Take off from your driveway, land anywhere," it teases. Nearly a quarter century later, I'm not taking off from my driveway, and I've never seen a SkyCar on the ground or in the air.

Even if I did, it'd be a millionaire's plaything, not a viable means of ultra-efficient transportation for the masses. The Transition is expected to sell for a base price of $275,000, while AeroMobil's CEO has promised that the 3.0 will be a luxury item that costs somewhere between a supercar and an aircraft.

For that kind of money, you can buy a really amazing car and a great used aircraft that will meet or exceed the performance characteristics of these flying compromises. It's not like rich people need to be able to drive their plane to the airport to save a few dollars on hangar rental.

Put simply, a private vehicle that costs more than a quarter million dollars changes the game for no one — not even the wealthy who will buy it and stick it in a garage for occasional use next to a half dozen other cars, all of which are better, faster, and more versatile on the road.

That's all assuming that flying cars are even remotely new concepts. They go back far beyond 1991's SkyCar: there's the Aerocar, which dates back to 1949. Like the Terrafugia, it could be folded up for driving, then quickly assembled for flight when it reaches the airport. (I'd argue it's a lot cuter than the Terrafugia, too.)

We like the notion of flying cars because they evoke an iconic mental image of the future, of science fiction in its purest, most optimistic form. But don't be fooled: the vehicles that have been making headlines over the last couple decades aren't that, nor will they ever be. They're just solutions looking for an extremely wealthy problem.