She may love her friends, but Canadians are being left out in the cold

I write about entertainment for The Verge, and like any entertainment reporter worth their salt I consider myself a connoisseur and appreciator of Kwality Kardashian Kontent. I've considered downloading their various individual apps before balking at the steep subscription fees; I've become familiar with the work of Olivier Rousteing and Glam Squad veterans like Joyce Bonelli; I watched Kourtney and Khloé take the Hamptons in its entirety. (And yes, I put the accent on Khloé.)

So you can imagine my surprise when I settled in for a second viewing of the 60th birthday video the Kardashian-Jenner women prepared for Kris Jenner this weekend only to discover that it had been blocked in my country. (I live and work in Canada.) Jenner turned 60 on November 5th. I watched the video Monday morning without issue — Mugging on treadmills! Guest appearances from Kanye, Bieber, and Katy Perry! A Caitlyn Jenner cameo! Writing credits for everyone from Kourtney to Kylie! — and spent the afternoon working on other projects. When I came back to Kim Kardashian West's official YouTube account for a second helping yesterday evening, my world was shaken to its core. 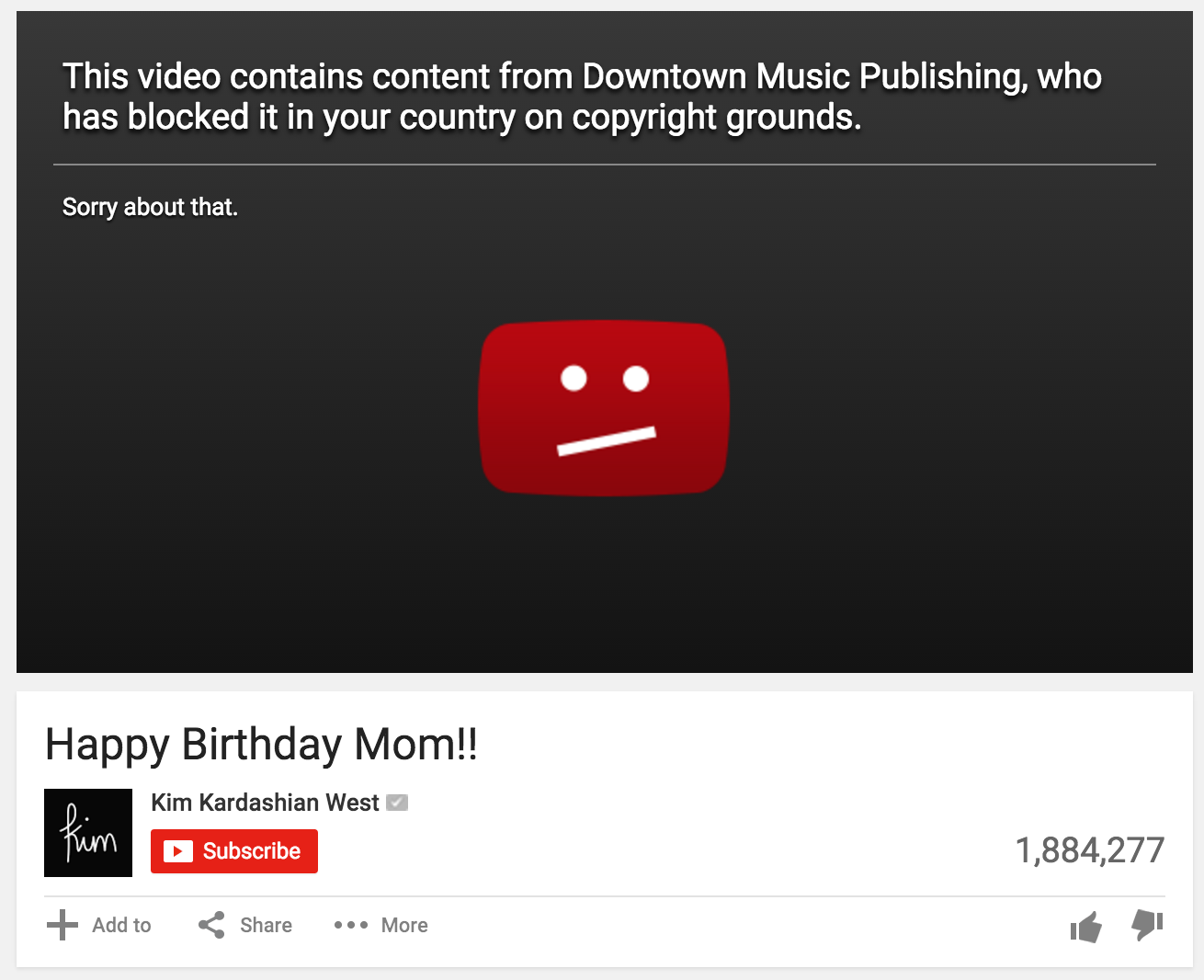 Where do I begin my quest for justice? How can I restore light to the lives of Kris Jenner's thousands (millions?) of Canadian fans? The first clue's tucked within the picture above. The video's been blocked in Canada because of a copyright claim by Downtown Music Publishing, a large multinational firm that specializes in music rights management. The company's roster is full of popular artists: Bruce Springsteen, John Lennon, and One Direction are all clients, among others. The key client in this case is musical legend Randy Newman, whose "I Love LA" forms the basis for the parody "I Love My Friends" featured in Kris Jenner's two birthday videos. (The first was made for her 30th birthday in 1985.)

I sent an email to Downtown Music Publishing with two questions: 1) Why has the video been blocked on the basis of a copyright claim in Canada but not in the US? 2) What is the mechanism by which a Canadian Kris Jenner enthusiast can restore the video's playability? I was looking forward to capping off a busy Monday on the internet with another look at the affectless faces of the Kardashian-Jenner family and their famous friends as they attempted to achieve an easy sort of frivolity. It's Tuesday morning now, and I haven't received a response from the company; Happy Birthday Mom!! is still inaccessible. I think I have to accept my dreams have been Krushed.