Few animals alive today have been around as long as the alligator gar. This hideous fish existed long before Homo erectus hiked out of Africa 1.8 million years ago — in fact, they predate humanity altogether. Over the last couple hundred years, humans have been in the process of methodically eradicating these ancient monsters — and I can't help but think that their appearance has something to do with it. Ultimately, the case of the alligator gar prompts an interesting question: in our era of mass species extinction, are ugly animals doomed?

The gars, a family of fish with long bodies, extended jaws, sharp teeth, and hard scales, has been on the planet for at least 100 million years. The alligator gar, the largest of the clan, thrived in North America’s Mississippi Valley until the 19th century, when fishermen accused the alligator gar of being "river pirates" and consuming their own weight in game fish every 36 hours. In an effort to stamp them out, fishermen adopted a kill-on-sight policy, catching, spearing, shooting, and, when convenient, blowing alligator gars into the air with sticks of dynamite. Their methods were effective: the fish’s range has been reduced to mostly just the southern bits of the Mississippi Valley — Alabama, Louisiana, Mississippi, and the like. 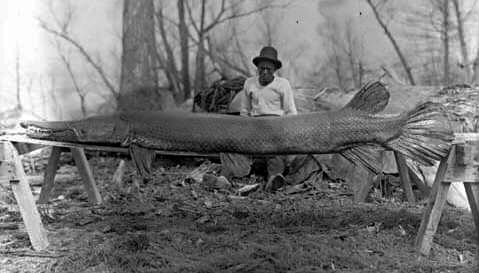 Are you kidding me?

A sort of fishy Frankenstein, the alligator gar fuses the bloated body of a catfish with the vicious maw of an alligator and the lidless gaze of a serial killer. This is a beast bred in the terrifying sewer of nature’s imagination; a creature designed and honed over millions of years to populate nightmares. The flint-like scales that gird its body are so hard that Native Americans once used them to fashion spearheads. In case the alligator gar’s first set of razor sharp teeth don’t mangle you, they possess a second, recessed row. They can grow to 10 feet in length and weigh 350 pounds. In 2011, a Mississippi fisherman caught an alligator gar that was estimated to be 95 years old. That’s really, really old.

Though the dynamite has been retired, alligator gar fishing and bowhunting continues. A 2009 Wall Street Journal headline read: "The Alligator Gar Is One Ugly Fish, With Few Friends but New Fans." The "new fans," were hunters who had begun to treat the mammoth fish as trophy game. With fans like those, who needs enemies?

Over the last half century, alligator gar populations have continued to plummet; conservation efforts are slow coming. The fish has been classified as endangered in Arkansas and Kentucky, and is considered rare in Missouri and threatened in Illinois.

There’s evidence to suggest that one reason the alligator gar is in its precarious position is because, well, it’s ugly. Over the last 10 years, Coca Cola has raised millions of dollars to assist the WWF in protecting its corporate mascot, the polar bear. By 2035, the US will have spent almost $125 million in a joint partnership with Canada to resuscitate whooping crane populations, famous for their elegant mating dances. There’s a reason you don’t hear much about threatened but oafish animals like the alligator gar: they don’t raise money nearly as well.

Of the 1,200 threatened mammalian species around the world, less than 100 are used to raise funds for conservation efforts. Most of these are celebrity animals: pandas, elephants, gorillas. That attention translates into research: a 2010 study suggested that charismatic animals are far more likely to be the subject of published studies than their less photogenic ilk. If you want to survive the Sixth Extinction, you better be large, furry, and cute.

A few years ago, Ernest Small, a research scientist at Agriculture Canada, offered the National Post a bullet list of traits that an animal should possess if it hopes to survive into the future:

• Human-like traits, such as having a high forehead and expressive eyes and being a mammal, or at least a vertebrate;

• Be large and fierce. For some reason we like dangerous animals, and are fascinated with their weapons, from teeth to horns. (Watch any kid in the dinosaur gallery.) Small thinks this may explain the fact that tigers are the kings of global conservation efforts;
• It must live above ground, preferably in a family setting showing off the mother with adorable cubs or kittens (one Toronto conservationist calls such animals "the cuddlies");
• It should not smell bad;
• It helps to be warm-blooded;
• Bright colors also help while being covered with scales, or a slimy skin, is bad;
• Attractive animals eat "clean" food. We don’t like scavengers and carrion-pickers;
• Traits that are unhealthy in humans should be avoided. We have little urge to conserve animals with warts, bow legs, wrinkles (except for elephants), irregular teeth, or a habit of drooling.
The alligator gar checks none of these boxes. But as a predator species, it sits on the top of its food chain, maintaining healthy populations of smaller fish and crabs.

Do I like alligator gars? No. Their very existence makes me question nature’s good judgement. I wish they’d died out with the dinosaurs. Then maybe I wouldn’t have run across them while conducting my semi-regular Google Image search for "world’s biggest fish."

But they didn’t. Millions of years on, they continue to be an important thread in the beautiful, heroic, frightening, and yes, ugly fabric of life on Earth. We need the alligator gar and its grotesque brethren to remind us of that: nature doesn't care about cute. It laughs at our horror.

So go ahead and do you, alligator gar. Keep reminding us of just how awful nature can be. Just please do you far from me.