Do the Simpsons live in the southern hemisphere?

Do the Simpsons live in the southern hemisphere?

It's the greatest pop culture mystery since Paul McCartney's "death," and the answer just got even more elusive — which state do the characters of The Simpsons live in? Fans have argued over the possibilities for almost as long as the show has been around, but astronomer Phil Plait noticed a clue in a recent episode that might reframe the entire debate. In "The Musk Who Fell to Earth," Tesla and SpaceX CEO Elon Musk gazes out of the Simpsons' dining room window at a waxing crescent moon. The only problem is that, in the northern hemisphere the "tips" of a waxing crescent moon should be pointing to the left, not to the right like in the episode. Plait says this can mean only one thing: The Simpsons takes place in the southern hemisphere. Is it a clue, a mistake, or a troll?

Plait playfully suggests that this could be a major clue, which would mean The Simpsons has taken place on another continent this entire time. But it's more likely that the episode just featured a lazy representation of nature, something common in pop culture. In the last few years alone, Neil deGrasse Tyson took umbrage with the starry skies of Titanic and told Jon Stewart point blank that the Earth in the The Daily Show's intro was rotating the wrong way.

The minds behind The Simpsons have been partial to intentional misdirection in the past. For example, the character of Ned Flanders says that Springfield (impossibly) borders Ohio, Nevada, Maine, and Kentucky in The Simpsons Movie, and there are countless breakdowns of other evidence scattered around the internet. Nothing seemed as concrete, however, as when creator Matt Groening mentioned that the town was inspired by Springfield, Oregon in a 2012 interview. Fans went wild debating whether or not the answer had finally been revealed, until Groening elevated the decades-long troll to a whole new level with the following week's opening title sequence: 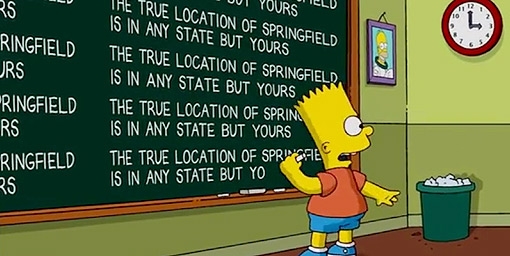