Who is Pokémon Go's Professor Willow and why is he such a daddy?

Who is Pokémon Go's Professor Willow and why is he such a daddy?

I downloaded Pokémon Go last night like a dutiful citizen of Pallet Town (Bushwick is the Pallet Town of New York, okay), and had to catch my breath at the first opening screen. Standing before me was an unfamiliar — but not unwelcomed — face, a prematurely graying man with an exquisitely chiseled jaw attached to a toned body that just wouldn't quit.

I immediately took a screenshot, then put my phone away because I was at a backyard BBQ and I didn't want to be rude. This morning I fired up the app again, faced the glistening eyes of this salt-and-pepper haired man of authority again and took another screenshot, forgetting about the one I had taken 12 hours earlier.

His name is Professor Willow, and I am definitely not alone in my Poké-crush.

Yes, but can I catch Professor Willow? #PokemonGo #HelloThere pic.twitter.com/AIwgxHJ51S

His fashion taste may be questionable...

YOOO PROFESSOR WILLOW WHAT ARE THOSE pic.twitter.com/7uwTyTsP4U

...and he kind of resembles a way more attractive parallel universe version of Rick from Rick and Morty...

Whoa, why is Professor Willow in #PokemonGO a bishounen version of Rick Sanchez? pic.twitter.com/6GxX9juCHK

But he's got pick-up game.

It's been less than 24 hours since Pokémon Go was released and Tumblr has wasted no time in being Tumblr:

If you're more of the auditory type, you can listen to an impassioned performance reading of all the tags used to describe Prof. Willow:

There's some good fan-art amidst all of this filth and sin though:

The Pokémon universe has several different professors of varying hotness, ranging from "Is this a joke" to "Yes, I will go out and fill up this Pokédex for your lazy ass because I would die 4 U". This video does a good job explaining the five main ones: 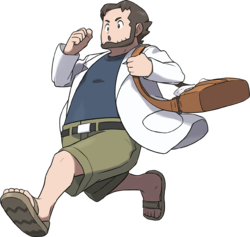 What a doofus! I wouldn't give him any grant money, that's for sure. Pokémon professors are all named after trees, this cargo pants-ed dingus's name is Professor Birch. If I had it my way though, I'd call him something like Professor That Sad Bare Christmas Tree from Peanuts.

I haven't played the game far enough to see if my fave Professor Willow makes any more flirtatious appearances, but you can bet your bottom dollar I'll be Ubering all over town for a chance to "accidentally" run into this hottie.