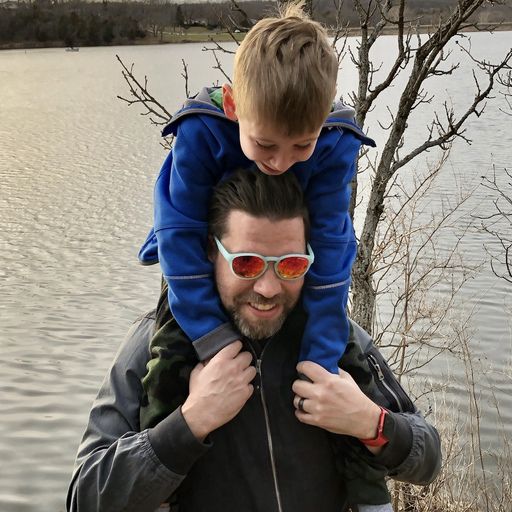 There are two things that I can find that might arguably be "plot points" and neither seem particularly pivotal in a way that might even charitably described as "spoilers."

The first seems lime basic setup and the second feels like table stakes for a murder mystery.

(I apologize for spoiling that this is, in fact, a murder mystery.)

commented on Glass Onion solidifies Knives Out as the next great mystery franchise, Sep 12, 2022, 5:59pm EDT

I think it’s the sign of a weekend verge article.

The thought here is that perhaps foldable is peak form.

Hard disagree, overall, but the sentiment I was getting at was that slab phones have nowhere meaningful left to go from a design standpoint. (Setting aside some sort of game-changing battery technology that seems out of reach for the moment.)

Rogue One is literally

I’ll give you arguably.

commented on The Mandalorian season 3 teaser trailer collects all of our old friends, Sep 10, 2022, 4:38pm EDT

I mean, the reason they exist is pretty much exactly the same:

Older devices basically reached peak form and it was getting hard to get people to spend money on new devices that were mainly just a little faster and lighter, etc., and old devices were holding up.

So a new category of device is introduced in an effort to convince people to buy. I think it’s too early to say whether or not folding phones will go the way of 3DTV or Curved Screen TVs or somehow catch on with mainstream audiences. (I have my doubts that it’s a solution the overall market feels is necessary.)

I personally think if Samsung believed it was the next big thing they’d focus most of their attention on the category to drive adoption. (Much like they did with the Phablet form factor.) Instead, they are treating it like the niche curiosity it is.

I think you misspelled stupid.

What I find "interesting" is the lede that all of this is stupid and unimportant dick measuring followed up by an entire article of examples … so get out your measuring tape.

What are companies supposed to do? NOT brag about their products? NOT say they’ve done it best? NOT imply that everyone else got it wrong?

So, just to be clear, my point wasn’t ever that there wasn’t nuance to this debate (and I would argue that the nuance appears in the actual article and people should learn to worry less about headlines). My point was pretty simple:

If you don’t care enough to back up an allegedly simple claim, just don’t comment. In this case, there wasn’t even a summary of proof. It was just "this would be easy to disprove."

Okay? Good for him? Weird flex.

Now that YOU put in some work, though, everyone is a little smarter. I’m not completely sold that anything Chris said in his comment (Sony did it using a phone first) has been disproved, but people certainly have more detail about why BOTH Sony and Apple are refining previous ideas and Apple has gone farther down the refinement line.

Yeah. I remember when the iPod Video came out and it was the most "your scientists were so preoccupied with whether they could" moment.

(Only to eventually be eclipsed by the iPod nano’s swallowable size.)

Yes. Reasonable. Which is why the court very clearly laid into them for their unreasonable discovery shenanigans.

Those articles don’t seem to disprove the idea that " Sony was just the first to use a phone to scan ears, analyze the profile, and adjust the sound field accordingly."

I don’t think the claim was that Sony invented the concept and pioneered the research.

And, again, perhaps some other company has released a phone that can take a picture of your ears and then analyze that profile and apply the research to adjust the sound for consumers, but I don’t think your articles provide that easy proof.

And, yes, I agree that some people don’t want to take the time to defend their opinions but if people are gonna leave lazy claims without defending them (especially when doing so is apparently easy) I’m just gonna assume it’s because they can’t.

And then point it out.

Well, I can tell you that there’s a line and it feels like the court has already indicated that they’re tiptoeing along it.

Can they do it? Sure. At the risk of antagonizing the court.

I honestly don’t know one way or the other but if you disagree with something and it’s easy to prove your stance, why not just do it instead of CLAIMING you could?

Can you just let me know in advance if this is your honest take on the history or if your goal is to start a debate about what you know is an incorrect statement of history and then watch the drama?

For those interested in a more compelling (and correct) take:

I think the main issue here is you have to weigh two factors: Would the increased number of watches Apple might sell be outweighed by the benefits of tying the watch to iPhones? Would someone be more likely to consider an Android device as an upgrade or just mixing and matching from the start and never buying an iPhone period? In general, I think Apple should probably have more faith that people actually want the iPhone because they actively don’t WANT Android and worry less about it, but in general I think Apple’s pre-Jobs-return issues haunt their nightmares and they obsess over this stuff. (Sort of like depression era people still hoard random shit despite no longer living in the depression.)

With the iPod, the answer was a hearty "fuck no! we need to sell as many of these as possible and HOPEFULLY someone who buys non-Apple PCs will see how delightful an iPod is and decide ‘maybe a Mac is also delightful.’"

With the Apple Watch, Apple doesn’t need to use it to convince anyone to use an iPhone. People are making that choice anyway.

I think the BEST reason to open it up is legal. Making it work either way takes away one piece of evidence that Apple is trying to PREVENT people from switching. I personally think the argument that making various devices that work really well within an ecosystem ought to be illegal to be a bit crazy, legally speaking (even at their current market power) but Apple also needs to read the room as far as which way the legal winds are blowing.

And yet, since at least 2019 (and maybe as early as 2017) apple watch has outsold the entire switch watch market by millions of units.

I dunno. Seems like Apple came out on top.

How do you think it turned out?

Do you honestly believe the general public has strong feelings one way or the other?

But, yes, i am basing it on 1) observation and 2) the continued astronomical success of the product.

I mean, dynamic island is fine but "notcho bar" was the obvious choice.

Anecdotally, sure. But I don’t think you (or any other singular opinion) matter much when the general consensus doesn’t match your take.

By and large, people didn’t give a shit about the notch when it provided NO contextual functionality.

I assume it’s the "fuck you Apple for naming it that" which is weirdly aggressive but, yes, typical here.

I can see an eye roll, or even finding the name cringey, but…

Anyway, Dynamic Island amuses me in that Apple KNOWS a certain vocal segment of the population hates the notch and they have sort of doubled down and named it as a feature, not a bug. Wish they has called it a "dynamic notch" to even further poke but dynamic island is probably a better marketing name.

I don’t love the typography. There’s weird spacing in the text thatmakesithard to read.

I also found it interesting that he kept the "sent from my iPad" default signature. What a grandparent thing to do.

commented on Steve Jobs’ friends and family just launched an archive to celebrate his life, Sep 8, 2022, 12:55am EDT

Yeah. People who are paralyzed from the neck down are so lazy!

With that said, this wasn’t about what the "least lazy" way to do something is, it’s about the "best" way to do something. Your claim that the "best" way to turn off a light is always the physical light switch ignores a lot of arguable instances where walking to access the physical switch is either inconvenient or not possible. (What if I’m at work and the lights were left on? Or on vacation and I would like to turn them on occasionally? Or if I’m just a lazy fuck and don’t want to put underwear on because I sleep in the nude and my downstairs is wall to wall windows? Or getting up just seems like a hassle? Or, as mentioned, I’ve lost the use of my arms and legs? Or I’m super fit but feel like I can skip the 10 foot walk to the light switch because I run marathons and fuck anyone who thinks that makes me lazy because who are they to talk?)

I kinda doubt Apple’s year over year changes are designed for last year’s iPhone purchasers. I also assume they think anyone who DOES replace phones yearly is gonna do it even while complaining about not having a compelling reason to do it.

I think this is a list of things that some people thought Apple MIGHT announce or is expected to someday announce.

Otherwise, yes, RCS as well as flying pigs could have been mentioned.

I don’t know that you can say adding new claims "strengthens" Musk’s case. It adds to it. He still has to prove his claims. I guess if he has expanded the number of ways he might be able to back out, his odds theoretically increase, but lots of bad claims are still just bad claims.

I think there’s a middle ground. First of all, the wall or lamp is not the best way to turn off a light switch if you are upstairs in bed and the light is on. Or even fairly close just don’t want to get up.

"Hey Siri (or whatever you use) turn off the living room light" is the best way, requires no (at least, paid) subscription (do some lights require that?) and works 99% of the time. If, for some reason it doesn’t, one still has the option to use a switch. Like a caveman would.