It works great as a 3ds or any Nintendo emulator.

Excel is a bad example. I work on monstrous spreadsheets where a simple function can suck up gigabytes of Ram and bring 12 core cpus to their knees.

I don’t see any weight.

Neo is missing because Intel failed hard with Lakefield. It performed so poorly in prototype testing that Microsoft couldn’t use it. And Lakefield got discontinued before it was even released. Now Intel is promising big little with Alder Lake. we’ll see how that works out (not holding my breath).

I used the Fold and the Fold 2 a lot and there’s no way I would take any Fold over a Surface Duo, let alone the Surface Duo 2. The only scenario where I would want a Fold over a SD is if you want a big tablet screen. As a multitasker, the SD beats the Fold easily. And the reason is because I feel you always have to actively do things on the Fold. You have to resize the apps manually. It’s like resizing windows on a big ultrawide monitor. Sure, you can have settings kind of remember. But on the Duo, you don’t have to think of anything. The multitasking is automatic. If you multitask a lot, you start to realize that with the Duo, you don’t have to think about it. If you tap a link, the link will open the other app on the other screen automatically. No thinking.

The other major issue I had with the Fold phones is that each phone half is too skinny. so to me, the only time the Fold is good is when you unfold it to a big screen. On the Surface Duo, I’m often watching a Youtube video on one screen while web browsing or making an email on the other screen and each screen is super roomy. Typing on the Fold phones in single screen mode was so cramped with such a terrible keyboard. Typing on the SD in single screen mode is so much better. I can’t say typing on the SD is ideal either because Google keyboard is so buggy on the SD so you’re forced to use Microsoft’s Swiftkey keyboard which is sluggish. 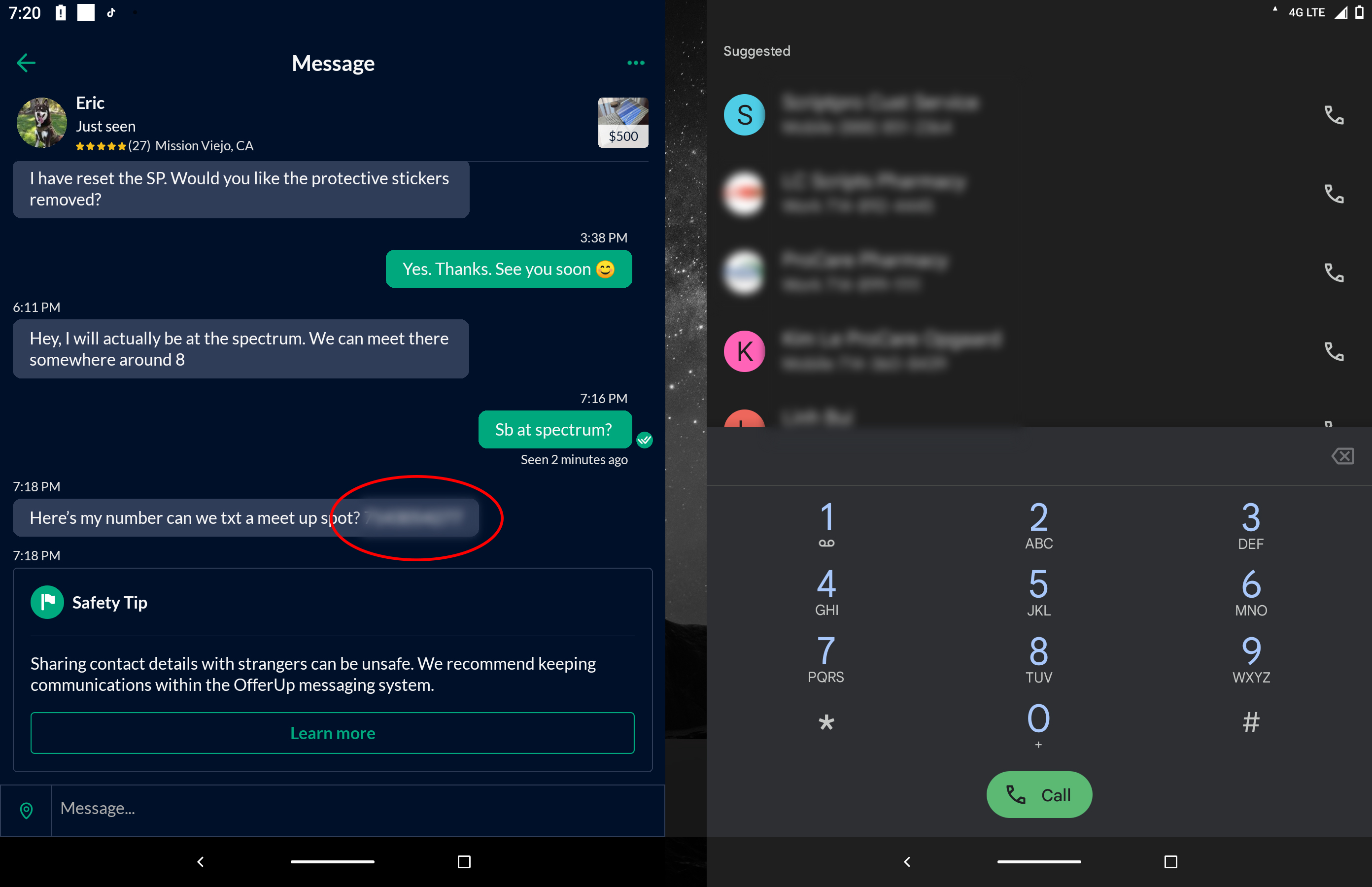 . I just did this tonight. I was to pick up something I bought on OfferUp. I was going to meet a guy so OfferUp is not great for texting back and forth. It was like snail mail. So he texted his phone number. So I brought up the dialer on the other screen and dialed him. No need to copy and paste. No need to switch apps. Just look left and dial right. And this isn’t even the best use of dual screens. So many times over the course of a day, 2 screens make everything easier. The phone isn’t for everyone but if you’re the type that hates having to flip between apps, that loves watching videos while doing other stuff, you’ll love the SD more than any other phone including the Fold phones.

I haven’t gotten my SD2 yet (and can’t wait!), but there is one scenario I hope is fixed. So before I ever got the SD, I loved the idea of having the display on one screen and the keyboard on the other screen (similar to the LG old days where you had a display on one half and a physical keyboard on the other half) so it’s like a LG enV which I had when I was a kid. It didn’t work on the SD because the implementation was buggy. Some apps didn’t like to work like that, many of them Google apps. I’m hoping that Android 11 and Android 12 fix that as rumors are strong that Google will be releasing a dual screen phone as well as a Fold-style tablet phone as well as rumors that Apple plans to do both as well.

And that’s why you should never review a product. I love my Surface Duo and can’t wait for surface Duo 2.and I was a Samsung galaxy s20, s10+, s9, and s8 owner. I’ve also used the note line a lot because my dad owns them. And I used the fold line which was OK.

He said himself that the drinks "will not get very cool at all."

korhoden's comment on Qualcomm is salty about Pixel’s switch to Tensor but really shouldn’t be,

I don’t use FB so I didn’t see that. Good catch. But I don’t think any of their article stated such

Puhleeeeease… thermoelectric is not as efficient as traditional cooling but that doesn’t mean they don’t work well. you see thermoelectric coolers all the time in camping scenarios. you can drop temps 20C (36F) below ambient which is more than enough for drinks.

If you go back to all the blogs and posts about the 3D emojis, none of them ever mentioned they would be in Windows 11. Go back and check. All they indicated was that these were Microsoft-designed emojis and indicated the new direction they were going with art design. And that they would be some future product which I’m assuming is Teams.

When I first saw them I wondered how they would work on low resolution 1080p displays. I also felt they were destined for Teams because the aesthetics match and because Teams had animated emojis. Still, the 3d ones were the most gorgeous emojis out there and I was secretly hoping they would make it to windows 11

Ayemageyene's comment on Waymo’s autonomous vehicles keep getting stuck in a dead-end street in San Francisco,

commented on Luna Display can now turn your iPad into a second screen for Windows devices, Oct 14, 2021, 10:34am EDT

I don’t see a windows user using this. Most windows users already have touchscreens. And many have Pen support. And if a person wants a drawing tablet that isn’t a pc, they can install Wacom or any number of other drawing tablets

commented on Luna Display can now turn your iPad into a second screen for Windows devices, Oct 13, 2021, 11:46pm EDT

You have a zillion phones to choose from that are single screen. I moved on from HTC, Motorola, and Samsung s8, s9, s10+, and s20 phones to the surface Duo and will never go back to a single screen phone. I can’t wait for the improvements in surface Duo 2!

If you’re not happy with something, move to something else. I love my Surface Pro 8 (i7, 16GB, 256GB) as I loved the sp7, sp2017, Sp4 (well this was the worst of the surface machines bc of skylake), and sp2. As long as Microsoft makes machines I love I’ll be a happy camper.

A 8cx Gen 3 is slower than the 888. That’s right. A Surface Duo 2 will be faster than any near-term Surface Pro X iteration…

Plenty of videos on YouTube show that the new ones are better but still delicate.

commented on Samsung tries to prove its foldable phones are tough in a new test video, Oct 11, 2021, 8:04pm EDT

Thanks for copying what I wrote

It’s not that. The old carmakers take care of the little details. How a switch feels. How a door thuds. How the suspension travels. Build quality. Most electric cars focus only on the electric drivetrain and touchscreen ui. And electric drivers put up with subpar build quality because of how high tech the car is.

AMD used to make arm processors. They had to sell that business because at the time they were bleeding and needed to sell parts of the business to stay alive. But now they’re humming and have passed Intel on both desktop and mobile processors

chiba's comment on Facebook is trying to stop the sale of Amazon rainforest land on its Marketplace,

commented on Facebook is trying to stop the sale of Amazon rainforest land on its Marketplace, Oct 8, 2021, 10:13pm EDT